Caption: Fleeing from death. An Armenian mother on the heights of the Taurus Mountains. Her husband has been killed or slaughtered, thrown into prison or driven to forced labour. On her back she carries all that she owns, i.e. what she could take with her, a blanket for sleeping or to use as a tent to protect against the sun, some wooden sticks, and then, on top of everything, her baby. How much longer can she carry this weight? The Government would bring them by rail to the foot of the Taurus Mountains. In 1915 trains could no go further as the tunnel had not yet built. From there, the refugees continued by foot. (Caption from Armin T. Wegner and the Armenians in Anatolia, 1915: Images and Testimonies, Guerini e Associati, 1996, p. 96.) 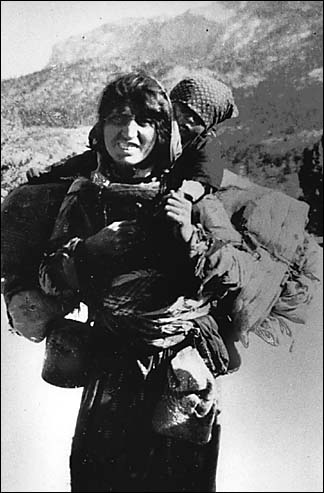