The pictures taken by John Elder between 1917 and 1919 constitute a rare photo documentation of the conditions in Armenia during some of the most trying years in the history of the Armenian people.

John Elder was a witness of the Ottoman invasion of Armenia in 1918 and experienced the trials of the Armenian people during the month of May when the struggle for survival reached its critical moment. His photographs capture the conditions of the Armenian population, especially those of the refugees to whose care he committed his energies. Elder traveled throughout Armenia and took photographs in all major points of refugee concentration and where relief work was being conducted. His images of the destitute and of the orphans are specially compelling. Captured unobtrusively, they testify to John Elder's sincerity as a humanitarian.

The photographs posted on the web site are identified by John Elder's captions. The names of the towns in Armenia photographed by Elder have changed:

Navigate through the Elder collection as a slideshow by clicking the arrows below.
Government feeding station -- Erivan 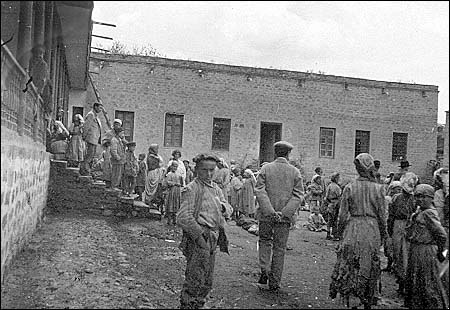 (Search the National Archives to find additional images relating to the Armenian Genocide.)