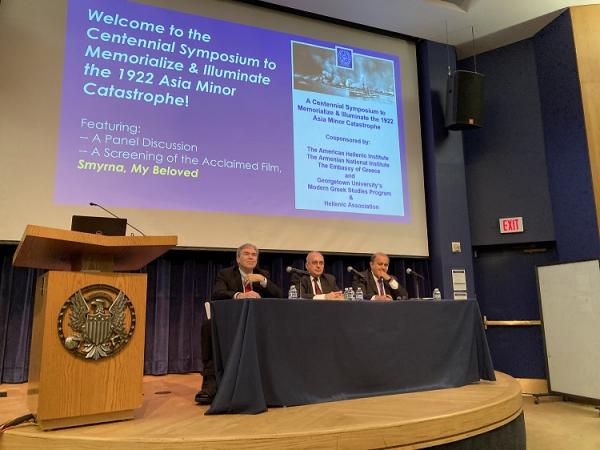 The occupation of Smyrna by Kemalist forces brought the conflict between Greece and Turkey to an end. It also marked the concluding episode of the mass expulsion of the indigenous Greek population of the Aegean coast of Asia Minor that had begun a decade earlier. In the case of the Armenians, Smyrna represented the last intact community spared the ravages of the 1915 Genocide, only to succumb to an even more frightful catastrophe. Cumulatively, the deportations and destruction resulted in the elimination of the Christian populations of Anatolia.

Dr. Lamb spoke of the “Misconceptions about Smyrna and the Asia Minor Catastrophe.” Dr. Adalian spoke about “American Witnesses in Peacetime and Wartime.” Mr. Larigakis addressed the question “Atrocities from History: Do We Learn?”

The symposium was inspired by the release of Ismini Lamb and Christopher Lamb’s magisterial volume based on a decade of research titled “The Gentle American: George Horton’s Odyssey and His True Account of the Smyrna Catastrophe.”

Horton served as the American consul in Smyrna in the fateful year of 1922 and wrote extensively about the daily events that transpired during the final destruction of the city. Panelists discussed facets of the value of Horton’s testimony and how his factual accounts disprove many of the false myths about the events of 1922. Critically, panelists explained how even the labeling of what occurred as the burning of Smyrna was inaccurate, as only the Greek and Armenian neighborhoods of the city were burned to ashes, subsequent to the mass slaughter of its inhabitants, providing ample proof to answer the question who brought about the disaster.

The panel discussion was followed with a screening of “Smyrna, My Beloved,” a compelling film on the order of the movie “The Promise,” depicting the unsettling parallels between the genocidal treatment of the Greeks and of the Armenians by Turkish authorities. The film was introduced with remarks by Her Excellency Alexandra Papadopoulou, Greek Ambassador to the United States.

The publication of Ismini and Christopher Lamb’s book was welcomed as another valuable addition to the documentation on the long process of the erasure of the Christian cultures of Asia Minor, whose parallel with the destruction of the Armenian heritage and presence in Nagorno- Karabakh did not escape the audience.

The centennial of the Smyrna tragedy is being commemorated in Greek communities across the world. ANI notes that the Armenian Genocide Museum-Institute in Yerevan simultaneously convened a three-day conference in conjunction with Aristotle University of Thessaloniki and Haigazian University of Beirut titled “Smyrna in the Context of the Armenian and Greek Genocides: Annihilation, Arson, and Deportation (September 1922).”