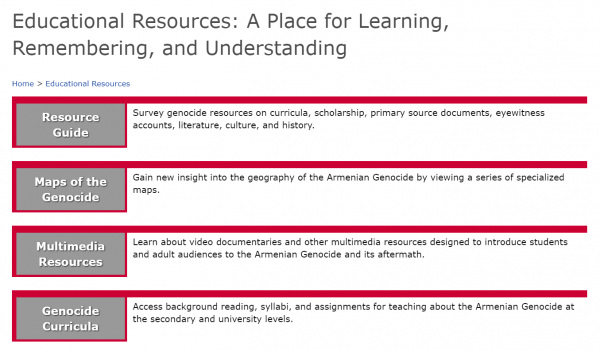 Washington, D.C. - The Armenian National Institute (ANI) has vastly augmented the instructional resources available through its website. Over 200 multimedia, digital, interactive, and published resources can now be viewed. The heavily-consulted Education section of the ANI website was reorganized to facilitate its use by teachers, students, and researchers, and to help each find relevant materials more easily. As an example, the Armenian Genocide Resource Guide now provides a brief description of 178 publications authored by scholars specializing in genocide and human rights studies, researchers specializing in aspects of Armenian history, and select accounts by survivors and witnesses whose testimony lends itself for use in the classroom.

Of the 77 new publications entered in the Resource Guide, it is noteworthy that the subjects of ‘Cultural Destruction, Recovery of Memory’ and ‘Legacy and Trauma’ now register a considerable amount of recent literature exploring new approaches to understanding the lasting consequences of the Armenian Genocide.

For more introductory purposes, ‘Multimedia Resources’ lists a set of film productions, mostly documentaries, including more recently released ones that may be accessible online, such as ‘American Good Samaritans’ and ‘Map of Salvation.’ Some theater releases are listed as well, such as The Promise and Ararat, which are more appropriate for advanced classroom settings.

Each exhibit covers a different aspect of the Armenian Genocide with extensive documentation and contemporaneous imagery, much of which was recovered from U.S. archives, and highlight some facet of the American response to the Armenian Genocide. ‘American Relief in the First Republic of Armenia,’ which explores the role of the YMCA and Near East Relief volunteers who traveled from the United States all the way to Armenia during the war years, has been especially popular for use in instructional workshops and public presentations.

As part of the goal of enriching the resources available to educators, the interactive online Armenian Genocide Museum of America’s (AGMA) holdings have also been expanded with the installment of more galleries with relevant imagery. The interactive design of the presentation has encouraged visitors, especially students, to explore the subject at their own pace and level of interest. Since its launch in 2015 as a contribution to the centennial commemorations, the online museum has remained in steady and constant usage. It proved a valuable alternative and accessible resource when educational institutions suffered interruptions on account of COVID-19 restrictions.

Other instructional materials on the site include an extensive chronology of the Armenian Genocide, entries on the Armenian Genocide from the Encyclopedia of Genocide, sample archival documents, sample press coverage, remarks by key figures, including White House commemorative statements from President Ronald Reagan to President Joe Biden, international conventions relevant to human rights and genocide, photograph collections, an extensive inventory of affirmation records from around the world, and a large database of Armenian Genocide memorials in 45 countries.

As an additional resource, the University of Toronto Press has announced the June 2022 release of the 5th edition of the market-leading textbook, Centuries of Genocide: Critical Essays and Eyewitness Accounts, edited by Dr. Samuel Totten, a leading educator in the field of genocide studies, now professor emeritus at the University of Arkansas. The publication was originally issued under the editorship of William Parsons, Israel Charny and Samuel Totten, and has been continuously in print since 1992. All editions contain a chapter on the Armenian Genocide authored by ANI Director Dr. Rouben Adalian. The chapter was updated with each new edition of the textbook. The 2022 edition now includes chapters on ‘The Genocide of California’s Yana Indians,’ ‘Genocide of the Herero and Nama in German South-West Africa, 1904–1907,’ ‘The Armenian Genocide,’ ‘Soviet Manmade Famine in Ukraine,’ ‘The Holocaust: Jews, Gypsies, and the Handicapped,’ ‘Genocide in Bangladesh,’ ‘Genocide in Cambodia,’ ‘The Genocide Perpetrated by the Government of Argentina (1976–1983),’ ‘Guatemala: Acts of Genocide, Scorched-earth Counterinsurgency War, and the Long Search for Justice,’ ‘The Anfal Operations in Iraqi Kurdistan,’ ‘The 1994 Genocide in Rwanda,’ ‘The Srebrenica Genocide,’ ‘The Darfur Genocide,’ ‘ISIS’ Genocide of the Yazidis,’ and ‘Genocidal Violence against the Rohingya.’

In 2021 the Armenian Genocide Museum-Institute (AGMI) in Yerevan issued the fourth edition of Remembering and Understanding the Armenian Genocide, an updated and expanded version of the original publication inclusive of reflections contemporaneous to the war on Artsakh in late 2020. The 70-page publication comprehensively addresses the consequences of the Armenian Genocide and is written in a style accessible to general audiences. AGMI has kept the essay in print for the past 30 years and makes it available to the public through its bookstore.