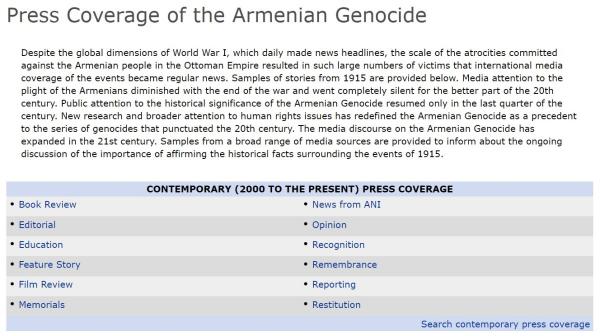 Washington, D.C. - As important as the 2021 international media coverage of President Biden’s remarkable acknowledgement of the WWI-era Armenian Genocide was, the lessons of this history were not sufficiently appreciated when Azerbaijan and Turkey launched a campaign in 2020 to eliminate Nagorno-Karabakh by eradicating its Armenian inhabitants. That attempted genocide has been documented by the Program on Peace-building and Human Rights (PBHR) at Columbia University’s Institute for the Study of Human Rights (ISHR).

In advance of April 24, 2021, media sources began forecasting that the White House was likely to make an announcement, while newspaper editorials, once again, called on the President “to use honest and accurate terminology in describing the Ottoman Empire’s killing of more than 1 million Armenians a century ago,” as the April 5 Los Angeles Times editorial appealed.

The reporting by major media organizations following the official announcement by the White House relied extensively on information provided by ANI through its website, especially the documentation on the list of countries recognizing the Armenian Genocide. Further, several reports linked directly to the ANI site, including Time magazine, The Washington Post, Politico, Le Monde (French newspaper), L’agone Nuovo (Italian newspaper), La Razon (Spanish newspaper), Times of Israel, The Indian Express, and NBC News, among others.

Such significant coverage by international media of the Biden Administration’s acknowledgement of the Armenian Genocide and its implications across a range of issues, including the Turkish government’s continued denials, the reassertion of human rights concerns in U.S. foreign policy, and the appreciation of the Armenian American community and Armenians around the world, is now reflected in the growing database of press stories available on the ANI website.

A selection of 360 major media articles can be found in the database, which is also organized into a number of categories to facilitate research into distinct aspects of the public understanding of the Armenian Genocide, and the long road to its recognition by 31 countries to date. The categories include: Book Review, Editorial, Education, Feature Story, Film Review, Memorials, Opinion, Recognition, Remembrance, Reporting, and Restitution. News from ANI can also be accessed through the database, which can be searched by author or source of publication.

Aware of the pace of coverage that was manifested by the change in U.S. policy, ANI also launched a Twitter profile to facilitate the sharing of information on current developments in the course of universal affirmation of the Armenian Genocide, and for advising audiences about notable publications by researchers uncovering new sources and exploring new theories on the causes and consequences of the Armenian Genocide. While the Press Coverage database provides access to important journalistic contributions, the Twitter account allows interested followers to access current reporting and trends in the international response to issues surrounding the subject - or the threat - of genocide, in the hope of keeping audiences alert to potential outbreaks.

Representatives of the media were also directly in contact with ANI with inquiries on the importance of the policy change adopted by the Biden Administration. On April 24, following the release of the White House statement, ANI Director Dr. Rouben Adalian gave several interviews to national and international news services.

Dr. Adalian also appeared in a recently released documentary. Specifically, “The American Good Samaritans” tells the story of several important American humanitarians only some of whom have received the recognition that they deserve for rescuing survivors of the Armenian Genocide. The film was produced by Manvel Saribekyan, who released “The Map of Salvation” in 2015 that focused on European humanitarians. “The American Good Samaritans” features interviews with a number of scholars from the United States, Armenia, Lebanon, Greece, Turkey, and Iran, among them Dr. Levon Avdoyan of the Library of Congress, Dr. Antranik Dakessian of Haigazian University in Lebanon, Dr. Konstantinos Fotiadis of Greece, Dr. Sargon Donabed, an Assyrian-American specialist, Dominica Macios, a researcher from Poland, Karen Mkrdchyan, researcher from Iran, Dr. Paul Levine, attorney Garo Mardirossian, and Shant Mardirossian of the Near East Foundation - the successor organization to Near East Relief - the main U.S.-based charity that sponsored hundreds of volunteers to aid Armenian survivors of genocide.