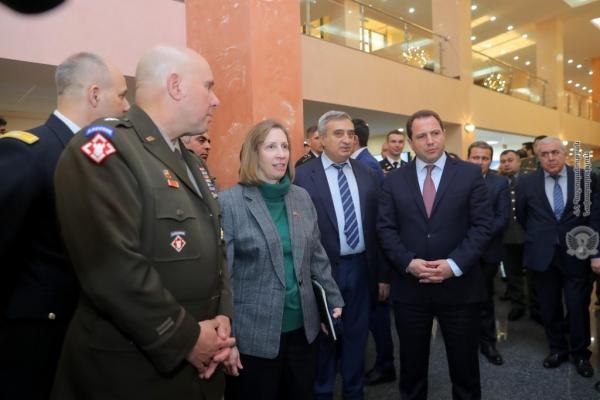 Yerevan, Armenia - United States Ambassador to Armenia Lynne Tracy and Kansas Army National Guard Adjutant-General, Major General Lee Tafanelli, joined Armenia's Minister of Defense Davit Tonoyan for the opening of the exhibit "The United States Military in the First Republic of Armenia 1919-1920" on January 27 at the Republic of Armenia's Ministry of Defense in Yerevan.

Created by the Washington, D.C.-based Armenian National Institute, the exhibit focuses on the enormous extent of humanitarian assistance rendered by the United States to Armenia in the aftermath of World War I through the services of American military missions sent to Armenia.

In his opening remarks, Minister Tonoyan thanked Ambassador Tracy for the support extended by the United States in recent years to Armenia. Reflecting on the historical exhibit, Tonoyan noted that: "For many, U.S. assistance during those years was critical, especially the new opportunities created to provide education thanks to which many Armenians received schooling during that difficult time and went on to make impressive achievements."

Ambassador Tracy delivered welcoming remarks congratulating those present on the occasion of the 28th anniversary of the Armenian Army and spoke about the important work done over the past 100 years.

U.S. General Tafanelli along with his delegation of officers viewed the exhibit and are in Yerevan as part of the U.S.-Armenia military partnership program.

Regional Director Arpi Vartanian, speaking on behalf of the Armenian Assembly of America and the Armenian National Institute, pointed out the importance of the high level military mission that U.S. President Woodrow Wilson dispatched to Armenia and stressed their effective intervention in stabilizing the humanitarian crisis in the country despite the small size of the American contingents. She thanked as well Armenia's servicemen on the occasion of the 28th anniversary of the founding of Armenia's modern-day army.

The 27-panel exhibit documents the tremendous importance of the U.S. humanitarian intervention during the most difficult years in the life of the newly-formed Armenian state. Based upon the photographic collection of an American medical officer, Dr. Walter P. Davenport, the exhibit reveals the depth and breadth of measures taken by U.S. military personnel to stabilize the humanitarian crisis in Armenia, and especially the caretaking of the most vulnerable part of the population through hospitals, orphanages, food distribution points, and other facilities.

Subtitled "The American Relief Administration and Walter Davenport of the U.S. Army Medical Corps," the exhibit reveals how in 1919, U.S. military personnel and civilian aid workers cared for tens of thousands of children. As Dr. Davenport reported: "At the present time we are furnishing food and medical relief to 75,000 children daily, this work being done through the medium of orphanages, orphanage hospitals, soup kitchens, cocoa kitchens, milk stations, bread distributing points, orphanage infirmaries, and public dispensaries."

The Davenport collection of photographs not only documents the humanitarian crisis unfolding in Armenia, but also the measurable difference American relief efforts made in the span of only a few months. The exhibit displays official and personal records related to Dr. Davenport's activities in Armenia, which he subsequently reported in The Military Surgeon journal. With 103 photographs, 3 maps, 14 documents, and several newspaper articles, the exhibit pictorially reconstructs the conditions that U.S. military personnel witnessed in Armenia.

The digital version of the ANI exhibit is available on online and free to download from the ANI website where five other exhibits may be viewed. Designed for instructional purposes, the exhibits explain several aspects of the Armenian Genocide that were well documented photographically.

•Iconic Images of the Armenian Genocide (also available as a slideshow)

•The First Deportation: The German Railroad, The American Hospital, and the Armenian Genocide

•The First Refuge and the Last Defense: The Armenian Church, Etchmiadzin, and the Armenian Genocide

•Witness to the Armenian Genocide: Photographs by the Perpetrators' German and Austro-Hungarian Allies

•Survivors of the Armenian Genocide