EXHIBITION AT CALIFORNIA UNIVERSITY TO FEATURE AMERICAN HUMANITARIANISM AND YMCA PHILANTHROPY IN ARMENIA, 1918-1920 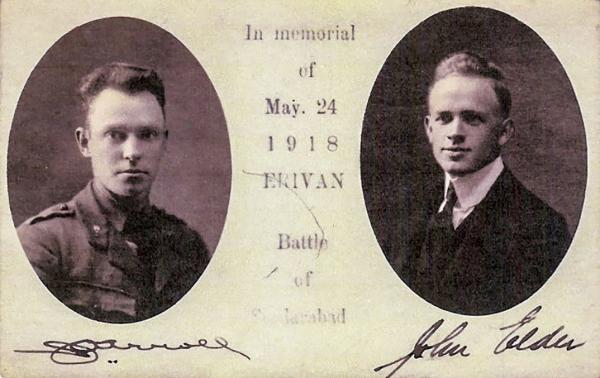 NORTHRIDGE, CA - The Armenian National Institute (ANI) and the Armenian Assembly of America (Assembly) are partnering with the California State University Northridge (CSUN) Armenian Studies Program, CSUN's West Gallery, the CSUN Office of Government and Community Relations, the CSUN Armenian Student Association, and the YMCA of Metropolitan Los Angeles to present an exhibition titled "The Lifesavers: American Humanitarianism and YMCA Philanthropy in Armenia 1918-1920," premiering in the Western United States on Saturday, October 26 from 3:00 p.m. to 5:00 p.m. at CSUN's on-campus West Gallery.

The exhibit showcases the role of the YMCA and American relief work during the first republic of Armenia (1918-1920), and focuses on John Elder and James O. Arroll, who arrived in Yerevan in January 1918 to open a YMCA center. Neither Elder nor Arroll had anticipated being stranded as the only Americans left in the country's capital city with all communication to the outside world cut off when the front line faltered. World War I was still raging at the time and Allied forces were in retreat on the Caucasian front. The November 11, 1918 Armistice that ended World War I was many months away. By the time they left Yerevan in August 1919, Elder and Arroll had become responsible for the entire humanitarian operation set up by U.S.-based charities, which ultimately earned them special tribute from U.S. President Herbert Hoover.

The opening program for the exhibit starts at 3:00 p.m. on Saturday, October 26, and is free and open to the public. The program will feature ANI Director Dr. Rouben Adalian, who researched and created the exhibit. Dr. Adalian will provide a brief overview at 3:15 pm explaining the photographic and documentary sources of the exhibit, as well as the importance of the exceptional accomplishments of the two YMCA volunteers who were recognized by the Armenian government for saving the lives of tens of thousands of Armenians in the critical first months of the newborn Armenian republic.

Representatives of the university, area elected officials, and community leaders will be in attendance joining CSUN Armenian Studies Program Director Dr. Vahram Shemmassian, members of the CSUN Armenian Student Association (ASA), and Dr. Adalian in launching the opening of the exhibit at the West Gallery. The exhibit will remain open for the public through Thursday, November 7.

"The Lifesavers: American Humanitarianism and YMCA Philanthropy in Armenia 1918-1920" exhibition displays 95 images total - 64 from John Elder's photo collection, 8 contemporaneous records and documents, and 4 maps. With 32 quotations from Elder's journal authenticating the photographs, along with introductory and explanatory text, the exhibit opens a window into life during the first year of the newly independent Armenian republic in 1918. The exhibit includes the entire set of photographs Elder attributed to his time in Armenia.

Other American personalities in the region appearing in the exhibit include the U.S. Consul in Tiflis, F. Willoughby Smith, who supported the efforts of the relief workers; Robert McDowell, who was at the front when the Turkish forces broke through and invaded Alexandropol/Gyumri; Dr. John H.T. Main, president of Grinnell College in Iowa, who witnessed the horrific conditions in Armenia firsthand on behalf of the American Committee for Relief in the Near East; missionary Grace Knapp; and John Mott, longtime president of the American YMCA, who, with the encouragement of his friend President Woodrow Wilson, dispatched young Americans wherever they could lend civilian support behind the front to soldiers in combat.

John Elder was particularly happy to welcome two Pennsylvania natives like himself, Pittsburgh businessman Howard Heinz, and president of the American Bar Association Walter George Smith, who traveled to Armenia on behalf of the American Relief Administration. Both were members of prominent families. Smith was married to Elizabeth Drexel, whose uncle, banker and philanthropist Anthony Drexel, founded Drexel University in Philadelphia. Smith became the most vocal American Catholic advocate of the Armenian people at the time.

Ryan Bean, Reference and Outreach Archivist at the YMCA Archives, who supported the project, remarked: "The Armenian National Institute has done a fantastic job telling this story. It is both tragic and heartbreaking on the one hand, and inspiring and humbling on the other. The timeliness of this exhibit is very appropriate, and I believe we could all learn a lesson from Elder and Arroll."

In its April 24, 2018 posting on its Facebook page, where the exhibit can be viewed, the YMCA Archives extended "Congratulations to Dr. Rouben Adalian and the Armenian National Institute on the release of the digital exhibit 'The Critical Role of the YMCA and American Relief in Armenia a Century Ago.' This exhibit both illuminates a tragic humanitarian disaster as well as highlights the capacity of the human spirit to persevere and do good in the face of a seemingly hopeless situation."

YMCA Europe, which encompasses 43 countries, also currently highlights the exhibit on its website. YMCA Armenia has been touring the exhibit across the country over the past couple of years where it has been mounted in Yerevan, Stepanakert, Gyumri, and other localities. Vardan Hambardzumyan, who heads the YMCA in Armenia wrote that he was "absolutely grateful to ANI for disclosing so eloquently the story of the YMCA in the Republic of Armenia back in 1918."

"I am so honored that the YMCA once again is partnering with ANI in bringing the remarkable story of its volunteers to the attention of the general public. They have been supporting this project from the start. Leaders from the Philadelphia area YMCA who joined the Armenian community this year on April 24 and heard the presentation were excited to learn about this forgotten chapter about their own organization and took great pride in welcoming the exhibit. I am looking forward to sharing this story for the first time with the Los Angeles community," stated Dr. Adalian.

Dr. Shemmassian, Director of the CSUN Armenian Studies Program, added: "Dr. Adalian has put together an impressive and dramatic exhibit that addresses the consequences of the Armenian Genocide and the important role American humanitarians played in relieving the plight of the survivors. As the exhibit makes evident, there were so many American relief workers who came to the aid of the Armenians in those tragic times that we still don't have a full picture of their contributions. They were the best exemplars of American philanthropy whose role in making the world a better place should be better known. I am sure our students and faculty will benefit from the exhibit and I look forward to welcoming the wider community in visiting the exhibit."

"The CSUN Armenian Studies Program was the recent recipient of a $2.1 million anonymous gift, and congratulations are in order. The gift is a tribute to the excellence of its program and the leadership of its Director, Dr. Vahram Shemmassian," stated Assembly Western Region Director Mihran Toumajan. "We are thrilled to be partnering with such a distinguished program, which plays a significant pedagogic role at a university that is educating more Armenian American students than any other institution in the United States. I would also take this opportunity to thank James Sweeters, Director of the CSUN West Gallery, and his staff for their guidance and support in realizing this valuable exhibit."

For media inquiries or for group reservations to schedule a guided tour of the exhibition, please contact: Mihran Toumajan at mihran@aaainc.org or (818) 291-6466.