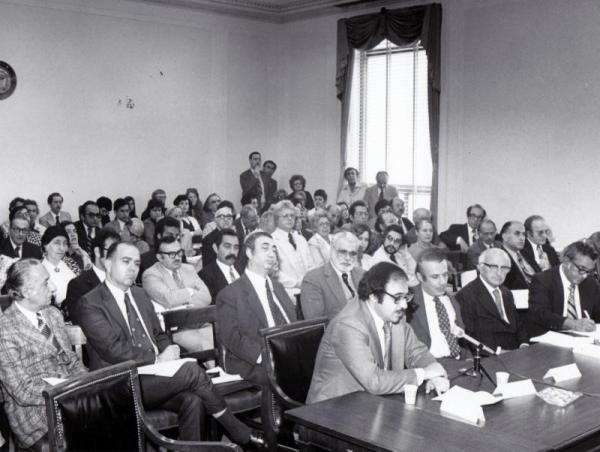 Dr. Vahakn Dadrian testifying in front of the Subcommittee on Future Foreign Policy Research and Development of the Committee on International Relations of the House of Representatives in May 1976. Front row at the desk are Dennis Papazian, Vahak

WASHINGTON, D.C. - The Armenian Assembly of America (Assembly) and the Armenian National Institute (ANI) join in paying tribute to Dr. Vahakn Dadrian, the internationally renowned scholar of the Armenian Genocide who passed away on August 2 at the age of 93.

The author of a set of critically important books and articles on the Armenian Genocide, Dr. Vahakn Dadrian was a central figure in the emergence of the field of genocide studies in general.

He wrote several groundbreaking works which forcefully demonstrated the state-wide mechanisms the Young Turk regime implemented in the course of World War One in order to eradicate the Armenian population of Armenia and Anatolia. The History of the Armenian Genocide: Ethnic Conflict from the Balkans to Anatolia to the Caucasus (1995); German Responsibility in the Armenian Genocide: A Review of the Historical Evidence of German Complicity (1996); and Warrant for Genocide: The Key Elements of the Turko-Armenian Conflict (1998), among other works, constitute the landmark studies that transformed the discipline of genocide studies by introducing a compelling body of evidence hitherto unexamined by scholarship.

With his formidable grasp of sources in multiple languages he erected a mountain of evidence extracted from archival repositories, and augmented by a wide reading of documentary and testimonial evidence, including the commissioners of the crimes themselves. In a number of articles in academic journals and in the series edited by Dr. Israel Charny titled Genocide: A Critical Bibliographic Review, Dadrian laid out the evidence from German and Austrian sources, which he regarded central to proving the conspiratorial nature of the Young Turk regime since Germany and Austria-Hungary were joined with the Ottoman Empire as allies during WWI and thereby had greater access and insight into the plans of the Turkish government.

By methodically constructing this body of evidence and demonstrating numerous parallels with the genocidal policies of the Nazi regime in conceiving and implementing the Holocaust as a crime specifically intended to destroy the Jewish populations under their rule, Dadrian single-handedly began to forge the comparative study of the problem of genocide. In the face of early skepticism about his theories, over the course of the years he successfully argued his case in multiple academic venues until such time as by the year 2000, 126 Holocaust specialists joined him in a public petition affirming "the incontestable fact of the Armenian Genocide" and urging "Western Democracies to officially recognize it."

Firmly persuasive in his scholarship, Dadrian also fearlessly challenged deniers by using official Turkish documents to make the point. By the same skill and patience with which he built his evidence, he demolished the false arguments and exposed the distortion of facts and evidence that formed the basis of a persistent denial of the Armenian Genocide by Turkish authorities and their academic cohorts. He summarized his finding in The Key Elements in the Turkish Denial of the Armenian Genocide: A Case Study of Distortion and Falsification, published in 1999 by the Zoryan Institute, where he served for many years as Director of Genocide Research.

Dadrian's authoritative investigations were published in a number of legal journals, including the Yale Journal of International Law. His 1989 book-length article, Genocide as a Problem of National and International Law: The World War I Armenian Case and its Contemporary Legal Ramifications proved a watershed event in historical and legal disciplines, securing his reputation as an internationally-recognized authority.

Speaking on behalf of the Assembly, its Board of Trustees Co-Chairman Van Z. Krikorian, reflecting upon the Yale Journal article said as follows: "This seminal publication also played a remarkable political role in altering United States policy and distancing it from echoing the Turkish government's views. I remember Congressman Charles Pashayan of California handing President George H.W. Bush a copy of Dadrian's publication and I am convinced of its contributive role in bringing about an improvement in U.S. policy by destroying the credibility of those in the U.S. government denying the Armenian Genocide which reduced their position to no longer denying the historical facts. The brilliance of this work was an exposition of Turkey's own trial records in unprecedented detail demonstrating the guilty finding of the indictments of the intentional annihilation of the Armenian people by the Young Turk leadership. Every person frustrated by the denial of the Armenian Genocide owes Professor Dadrian a debt of gratitude for countering this insidious practice."

Admired by colleagues, sought out by researchers from around the world, and a public lecturer who was given the podium at universities and the halls of parliaments, Dadrian was honored with many awards in his lifetime. Upon hearing of Dadrian's passing, Dr. Israel Charny recalled his friendship by writing: "I hail his greatness - the audacity of his researches, the steadfastness of his contributions, and his deep devotion to his people and to justice." Upon hearing the news of Dadrian's passing, Dr. Michael Gelb, Associate Editor of Academic Publications and Assistant Editor of Holocaust and Genocide Studies at the United States Holocaust Memorial Museum, stated: "it is indeed no mere formality to say that his influence on the field was inestimable."

Dadrian's publications were translated into several languages including Turkish, effectively making them some of the first works to introduce the subject in Turkey where an unofficial silence was maintained over the decades. Garo Paylan, a current Member of Parliament in Turkey, himself of Armenian background, noted: "His books published in Turkey played an important role in the international recognition of the Armenian Genocide."

"It is customary for younger generations to honor the memory of an authority of the stature of Vahakn Dadrian by speaking on how they stand upon the shoulder of giants," remarked ANI Director Dr. Rouben Adalian. "Vahakn Dadrian, however, was a giant of such immense stature and stands so tall that no one can even think of climbing upon his shoulders."

In May 1976, along with other prominent scholars such as Richard Hovannisian, Avedis Sanjian, Shavarsh Toriguian, and Dennis Papazian, Vahakn Dadrian testified before Congress on the Armenian Genocide. He spoke eloquently and prophetically of the continuing threat of genocide in front of the then Subcommittee on Future Foreign Policy Research and Development of the Committee on International Relations of the House of Representatives.

Clearly, we are moving in a direction where parallel to the shrinkage of financial, technical and administrative prerequisites to fashion a genocidal apparatus of destruction, the global vulnerability of vast masses of people to such destruction is increasing. This inverse relationship between reduced resources and amplified risks, symbolizing the explosive marriage of modern industrialism with nationalism, is perhaps the greatest challenge presenting itself to our present system of international relations. -Dr. Vahakn Dadrian, 1976