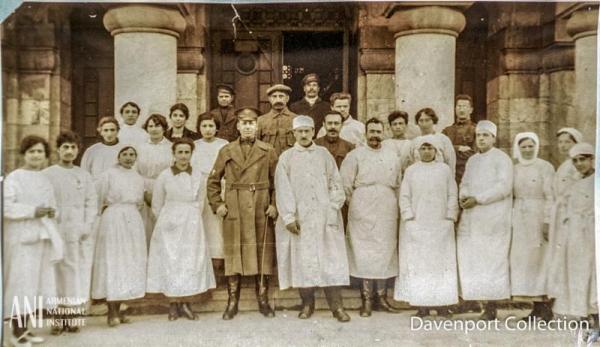 WASHINGTON, D.C. - The Armenian National Institute (ANI) announced the launch of a groundbreaking new exhibit: "The United States Military in the First Republic of Armenia 1919-1920." The 27-panel exhibit documents the extent of U.S. humanitarian intervention during the most difficult years in the life of the newly-formed Armenian state. Based upon the photographic collection of an American medical officer, Dr. Walter P. Davenport, the exhibit reveals the depth and breadth of measures taken by U.S. military personnel to stabilize the humanitarian crisis in Armenia, and especially the caretaking of the most vulnerable part of the population through hospitals, orphanages, food distribution points, and other facilities.

Subtitled "The American Relief Administration and Walter Davenport of the U.S. Army Medical Corps," the exhibit reveals how in 1919, U.S. military personnel and civilian aid workers cared for thousands upon thousands of children. As Dr. Davenport reported: "At the present time we are furnishing food and medical relief to 75,000 children daily, this work being done through the medium of orphanages, orphanage hospitals, soup kitchens, cocoa kitchens, milk stations, bread distributing points, orphanage infirmaries, and public dispensaries."

The Davenport collection of photographs not only documents the humanitarian crisis unfolding in Armenia, but also the measurable difference American relief efforts made in the span of only a few months. The exhibit displays official and personal records related to Dr. Davenport's activities in Armenia, which he subsequently reported in The Military Surgeon journal. With 103 pictures, 3 maps, 14 documents, and several newspaper articles, the exhibit pictorially reconstructs the conditions that U.S. military personnel witnessed in Armenia.

The exhibit profiles several important American military figures who rose to prominence as members of the American Expeditionary Forces (AEF) that were sent overseas to France to join the fight against Germany during World War I. Many of these officers later joined the American Relief Administration (ARA), created to respond to the postwar situation in Europe where food shortages threatened famine. The ARA was also tasked with relieving the plight in Armenia. Herbert Hoover, who headed the ARA, tapped former U.S. Ambassador to Ottoman Turkey Henry Morgenthau and General John J. Pershing, the commanding general of the AEF, for recommendations on the personnel to be assigned to Armenia. Many of the U.S. officers sent to Armenia were close associates of General Pershing and some were highly decorated veterans of the battles in France where they turned the tide of the war in favor of the Allies.

President Woodrow Wilson dispatched two missions to Armenia, a military mission headed by General James G. Harbord, which investigated the political situation in the region, and a humanitarian mission headed by Colonel Willian N. Haskell, which was also tasked with overseeing the undertakings of the Near East Relief organization that the United States Congress formally incorporated as part of the humanitarian relief effort in response to the dire situation in Armenia.

The exhibit also tracks the military career of several members of the two American expeditions to Armenia who climbed through the ranks to positions of major responsibility right up to World War II, including the likes of: General Frank McCoy, who served as General Harbord's Chief of Staff; General Sidney Spalding, who wrote a striking report on Armenia when he was a young colonel in 1919; General Leo Daley; and General Haig Shekerjian. General Shekerjian was the first Armenian American graduate of the U.S. Military Academy at West Point. He arrived in Armenia as a young lieutenant and in later life was instrumental through an organization, best known by its ANCHA acronym, which addressed the resettlement of the so-called DP Armenian population in Europe after World War II, the "Displaced Persons" who had been transported from Russia to Nazi Germany as slave labor.

Other significant figures in the exhibit include: Colonel James C. Rhea, Haskell's deputy and Acting Allied High Commissioner to Armenia; Captain Paxton Hibben; Lieutenant Harootiun Khachadoorian; Samuel Dutton, the leading American educator of the time and a major supporter of Near East Relief; and the famed medical doctor who pioneered reconstructive plastic surgery during WWI, Major Varaztad Kazanjian, who joined a contingent of 500 fellow Armenian American servicemen in presenting a petition to then Secretary of State Bainbridge Colby requesting formal U.S. recognition of the new Armenian republic.

Just as importantly, beyond the well-documented influence of President Woodrow Wilson in the matter, the exhibit also highlights the role of several other United States presidents who in varying capacities supported efforts on behalf of the Armenian people, including President William Howard Taft, President Calvin Coolidge, and his vice-president Charles Dawes, Herbert Hoover, and vitally, President Theodore Roosevelt, whose November 24, 1915 letter, published for the first time in this exhibit, called the Armenian crisis the "crowning outrage" of the Great War.

Former President Theodore Roosevelt's letter constitutes an important component of the American reporting and understanding of the mistreatment of the Armenians in the Ottoman Empire during WWI. General Harbord's report, another central document, also reveals the compelling reality in Armenia, as parallel reports by Colonel Haskell, Colonel Spalding, Dr. Davenport, and Herbert Hoover demonstrate.

The exhibit features the USS Martha Washington that transported the U.S. military and civilian personnel to the port cities wherefrom the two missions crossed into Armenia; the Near East Relief organization's fundraising campaign under the banner "Hunger Knows No Armistice," based on a report provided by Colonel Haskell; and the American Red Cross, which assisted Armenians all across the region.

Even as the exhibit profiles several of the U.S. military personnel for their individual roles, their collective contributions to shaping and implementing aspects of America's humanitarian response to the postwar situation is best exemplified by the outstanding figure of Dr. Davenport. His own associates, who were well-informed of his contributions "for country and mankind," summarized in rhyme the importance of the ARA in addressing challenges the world over.

Never before, such mass medical practice

To restore to health - to regenerate faith in living -

To prevent the spread of disease the world o'ver,

A stupendous task accomplished by the men of the A.R.A.

As with the 2018 exhibit on the role of the YMCA in Armenia that revealed the testimony corresponding to the John Elder Collection of photographs from the time of the First Republic, this exhibit also establishes the correspondence between the photographic evidence and the medical report that Dr. Davenport prepared. For purposes of historical authentication, Dr. Davenport rendered the additional service of captioning the specific locations of the photographs thus providing a panoramic view of the geography of the humanitarian disaster he witnessed upon his arrival in Armenia and the considerable relief measures that he and his associates, both military and civilian, succeeded in implementing in 1919.

"The relationship between Armenia and America is deeper than is widely known," stated ANI Chairman Van Z. Krikorian. "The tremendous American presence in Armenia from the beginning of the Armenian republic weighed the balance in favor of the survival of the Armenian people when surrounding forces were planning its extinction. Amazingly, U.S. humanitarian assistance continued to flow into Armenia even after the Soviets overran the republic. Even these two opposing powers, the United States and the Soviet Union, found agreement in the necessity of sustaining humanitarian efforts in Armenia. Equally, it was in Armenia that the United States first delivered humanitarian aid again decades later in 1988 to then still a Soviet republic. Given its severity, and in the spirit of ending the Cold War, President Ronald Reagan authorized the U.S. military to respond to the 1988 earthquake that devastated northern Armenia. Today the American military engagement with Armenia has a totally different character. Through U.S. sponsorship, it's become Armenia's turn to participate in NATO peacekeeping mission in other countries."

The exhibit concludes with a panel highlighting the current relationship between the United States Armed Forces, specifically the Kansas National Guard, and the Republic of Armenia Defense Department. It so happens that the Kansas National Guard is based at Fort Riley, where decades earlier Dr. Davenport was stationed and was last photographed among fellow soldiers. Armenia's Defense Minister Colonel David Tonoyan, who visited the Kansas National Guard in March 2019, presented a print copy of the exhibit to his hosts. As for Dr. Walter P. Davenport, his last call to duty was to serve during World War II with the headquarters medical staff of General Dwight D. Eisenhower.

"We want to thank Dr. Davenport's daughters, Jane and Mary, herself a physician, for entrusting their father's material on Armenia to the Armenian National Institute," stated ANI Director Dr. Rouben Adalian. "It helped uncover a vast field of information about the importance of American humanitarianism to the men and women who actually practiced it at a time of huge challenges with distances, transport modes, communications, delivery and distribution systems, and public health issues with continental consequences. The remoteness of Armenia did not hinder the commitment with which the likes of Dr. Davenport came to the aid of Armenians in need, whose numbers counted in the tens, if not hundreds, of thousands."

"We also want to thank Colonel Sarkis Semerdjian, U.S. Army retired, himself a U.S. Military Academy graduate who introduced me to West Point and the contributions of U.S. military personnel beyond their duties to country. The staff at the Library of Congress and the U.S. National Archives and Records Administration need to be recognized for their assistance, especially NARA archivist Rutha Beamon, and Project Manager of the Theodore Roosevelt Center at Dickinson State University Sharon Kilzer, as well as all the persons and entities that provided images, answered questions, and extended permissions, with special appreciation of Dr. Andrew Andersen of the Centre for Military, Security & Strategic Studies of the University of Calgary for the superb historical maps of the Caucasus he continues to prepare and generously share. Last, but not least, the unstinting support of the Armenian Assembly staff was invaluable for the completion of this project," added Dr. Adalian.

The United States Military in the First Republic of Armenia digital exhibit is the sixth exhibit developed by ANI. It follows upon other educational material developed for the centennial of the Armenian Genocide, including the five large exhibits displaying hundreds of historic photographs. These exhibits include:

• Iconic Images of the Armenian Genocide (also available as a slideshow)

• The First Deportation: The German Railroad, The American Hospital, and the Armenian Genocide

• The First Refuge and the Last Defense: The Armenian Church, Etchmiadzin, and the Armenian Genocide

• Witness to the Armenian Genocide: Photographs by the Perpetrators' German and Austro-Hungarian Allies

• Survivors of the Armenian Genocide

The exhibit can be freely downloaded. For printing poster-size display copies, please contact ANI for a higher resolution version.