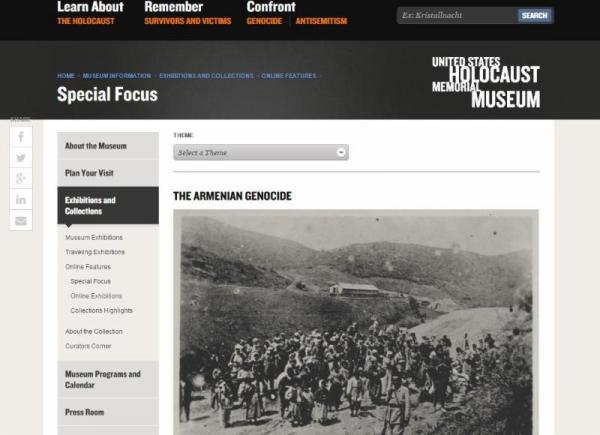 "The Ottoman government, controlled by the Committee of Union and Progress..., systematically eliminated the Armenian ethnic presence in the Anatolia region of its empire," the statement reads in part.The USHMM statement also references Raphael Lemkin, who coined the word 'genocide,' by explaining that: "The origins of the term 'genocide' rest, in part, in the evens of 1915-16 in Anatolia, then part of the Ottoman Turkish empire."

The full statement can be read on the USHMM website and is pasted below.

In addition to the historic statement, the museum now features a 'Special Focus' section in its online exhibitions dedicated to the Armenian Genocide, which provides background information, imagery, and select eyewitness testimonies from the USC Shoah Foundation's Visual History Archive. The 'Special Focus' also provides links to additional information including a more in-depth description of the Armenian Genocide in the museum's online Holocaust Encyclopedia.

Dedicated in 1993, the United States Holocaust Memorial Museum is America's national institution for the documentation, study, and interpretation of Holocaust history, and serves as this country's memorial to the millions of people murdered during the Holocaust.

Museum Statement on the 100th Anniversary of the Armenian Genocide

WASHINGTON, DC - On the 100th anniversary of the Armenian genocide, the United States Holocaust Memorial Museum remembers the suffering of the Armenian people. The Ottoman government, controlled by the Committee of Union and Progress (İttihat ve Terakki Cemiyeti), systematically eliminated the Armenian ethnic presence in the Anatolia region of its empire. Between the spring of 1915 and the end of autumn 1916, Ottoman authorities arrested, deported, conducted mass killings, and created conditions intended to cause widespread death among Armenian Christians.

At least 664,000 and possibly as many as 1.2 million Armenian men, women, and children died in massacres, in individual killings, or as a consequence of systematic ill-treatment, exposure, starvation, and disease. Knowledge of these atrocities quickly spread around the world and aroused widespread activism and even protests from representatives of the Ottomans' World War I allies, Germany and Austria-Hungary.

The origins of the term "genocide" rest, in part, in the events of 1915-16 in Anatolia, then part of the Ottoman Turkish empire. Polish-Jewish lawyer Raphael Lemkin highlighted early exposure to the history of Ottoman attacks against Armenians, antisemitic pogroms, and other cases of targeted violence as key to his beliefs about the need for the protection of groups under international law. Inspired by the murder of his own family during the Holocaust, Lemkin tirelessly championed this legal concept until it was codified in the United Nations Convention on the Prevention and Punishment of the Crime of Genocide in 1948.

An accurate understanding of history rests on objective research conducted by scholars of all nationalities and disciplines. The Museum calls on all governments and private institutions to make freely available complete archives relevant to these events.