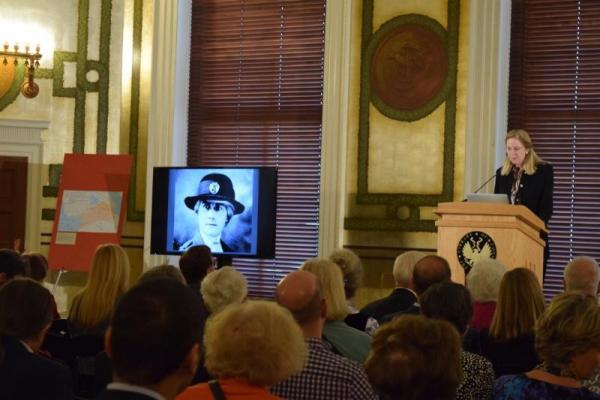 Formerly Senior Officer at The Pew Charitable Trusts and Executive Director of the Templeton Prize for Progress in Religion, and currently a nonresident scholar at the Carnegie Endowment for International Peace, Dr. Harper reported on her findings about physician missionaries who as part of the overall Near East Relief effort traveled to Armenia and other countries to deliver medical aid in the aftermath of the Armenian Genocide.

Harper focused on the contributions of Dr. Mabel Elliott who tended to the medical needs of refugees in Armenia, Turkey and Greece, and who authored one of the compelling accounts of the era "Beginning Again at Ararat."

Held on May 7, the lecture coincided with the opening day of events organized by the National Commemoration of the Armenian Genocide Centennial Committee and the Ecumenical Service held at the National Cathedral later that evening.

Dr. Harper previously participated in the conference organized in September, 2000 by the Armenian National Institute and the Library of Congress where she presented a paper on the missionary Mary Louise Graffam who witnessed the Armenian Genocide. Her and other presenters' papers were published by Cambridge University Press in "America and the Armenian Genocide of 1915," under the editorship of Dr. Jay Winter.

Additional Photographs of the 19th Annual Vardanants Day Armenian Lecture Series at the Library of Congress are available on the Armenian Assembly of America's Facebook Page.

Founded in 1997, the Armenian National Institute (ANI) is a 501(c)(3) educational charity based in Washington, DC, and is dedicated to the study, research, and affirmation of the Armenian Genocide.