ARMENIAN ASSEMBLY OF AMERICA MOURNS THE PASSING OF YOSSI SARID, RECALLS HIS EFFORTS IN ISRAEL FOR OFFICIAL ARMENIAN GENOCIDE RECOGNITION 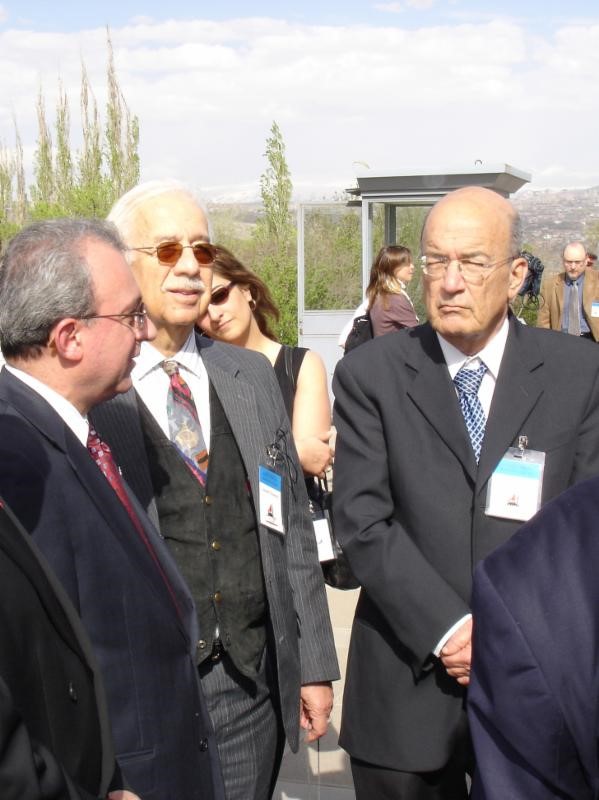 WASHINGTON, D.C. - The Armenian Assembly of America (Assembly) mourns the passing of former Israeli Minister of Education and Member of the Knesset Yossi Sarid, a prominent advocate and supporter of Armenian Genocide recognition in Israel. He passed away on Friday, December 4 at the age of 75.

As Minister of Education, Sarid delivered a ground-breaking speech on April 23, 2000 at the 85th Armenian Genocide anniversary commemoration in Jerusalem's Armenian Quarter. There he announced his decision to educate the children of Israel about the first genocide of the 20th century. During the commemoration, Sarid stated that he would ensure the Israeli school system teaches "the murder of the Armenian nation" by introducing them to Franz Werfel's "The Forty Days of Musa Dagh."

"I will do everything in order that Israeli children learn and know about the Armenian Genocide. Genocide is a crime against humanity and there is nothing more horrible and odious than Genocide," Sarid said during his speech. "One of the objectives of our education - our main objective - is to instill sensitivity to the harm to the innocent based on nationality alone. We, Jews, as principal victims of murderous hatred are doubly obligated to be sensitive, to identify with other victims."

A month following his remarks, Sarid reached out to the Assembly and wrote about his education plans. In the May 22, 2000 letter to the Assembly, he wrote "I fully intend to allow Israeli pupils to learn the lessons of your tragedy, which is ours and the world's, as well. Israelis are the last people who can afford to forget the tragedies of this magnitude."

Yossi Sarid's announcement prompted Congressional Caucus on Armenian Issues Co-Chair Rep. Frank Pallone, Jr. (D-NJ) to deliver a statement in the U.S. Congress. "Considering Israel's vulnerable position in the Middle East and its need to cultivate relations with Muslim nations, the action by Education Minister Sarid was a true profile in courage, a real statement of principle," Rep. Pallone said on the floor of the U.S. House of Representatives on May 23, 2000.

Despite his best efforts, Yossi Sarid was unable to fulfill his goal to include the Armenian Genocide in Israel's state curricula.

"During my stint as education minister, I held the view that, in failing to include genocide studies in the curriculum, the Israeli school system was neither fulfilling its role nor furthering its own goals and that, as a result, Israeli high-school students knew nothing about the Nazi regime's non-Jewish victims: gypsies, homosexuals, political prisoners, patients of mental health hospitals, persons with physical handicaps, Jehovah's Witnesses, Poles, Russian prisoners of war and 'other victims,'" Sarid wrote in Haaretz on April 16, 2003. "And it is not just the victims of the Nazis who are forgotten. What interest is shown here in this country in the genocide suffered by the Armenians, Bosnians and Rwandans?"

"Yossi Sarid was one of the most vocal and consistent champions in recognizing the Armenian Genocide in Israel. I credit Sarid for opening this discussion after many years of pressure from Turkey on Israeli authorities to remain silent," said Armenian National Institute (ANI) Director Dr. Adalian. "Following in Sarid's footsteps, President of Israel Reuven Rivlin and the Speaker of the Knesset Yuli Edelstein raised the issue and joined the world community in affirming the Armenian Genocide in April this year."

During an April 13 briefing, Rivlin congratulated Pope Francis on describing the mass killings of Armenians as the "first genocide of the 20th century," adding that this was an important issue for all human beings. A month later, on May 12, 2015, Israeli Knesset speaker Yuli Edelstein called on the government of Israel to re-examine its official position and recognize the Armenian Genocide.

"The State of Israel must thoroughly re-examine its official position because history, as we know, cannot be changed," Edelstein said. "We cannot, and are not permitted to cover up the great disaster that gripped the Armenian people and the depth of the moral blow that humanity suffered."

"Although Yossi Sarid has passed, his legacy and efforts towards educating Israelis about the Armenian Genocide continues," stated Assembly Executive Director Bryan Ardouny.