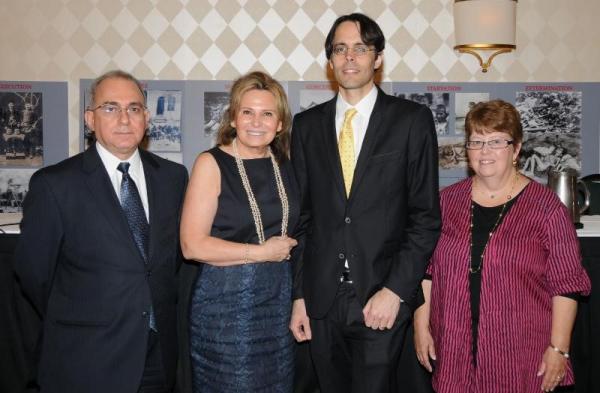 WASHINGTON, DC - On Saturday, March 14, the Armenian Assembly of America (Assembly) hosted an Armenian Genocide symposium entitled "A Century of Genocide: The 1915 Armenian Genocide and Its Lasting Impact," during the Assembly's Annual Members Weekend in South Florida. Over 80 Assembly members, friends, and guests attended the educational presentations and lively question and answer session.

Armenian Assembly of America Board of Trustees President Carolyn Mugar provided welcoming remarks and introduced Marta Batmasian. Batmasian introduced the panel to the audience and recognized members of the audience who have been researching and teaching about the Armenian Genocide in South Florida.

Batmasian introduced Dr. Adalian who presented the topic of "The Armenian Genocide as a Prototype of 20th Century Mass Killings," detailing the primitive yet effective template of mass killing that was developed by the Ottoman Turkish government. He showed images from the digital exhibit "The First Deportation: The German Railway, the American Hospital, and the Armenian Genocide," which took the audience back in time to a pivotal location of the deportations. Adalian brought to life the experiences and activities of Dr. Wilfred D. Post who administered the American hospital in Konya, a major station along the Berlin-Baghdad rail line which became the site of a large deportation camp. In defiance of the Ottoman ban on photography of deportees, Dr. Post captured what may have been some of the earliest pictures of deported Armenians.

Next, Batmasian introduced Dr. Gatens who discussed "The Impact of the Armenian Genocide on Holocaust Education." She discussed how the CHHRE at FAU had been working for years to advance Armenian Genocide education on campus and throughout Palm Beach County. Gatens drew parallels between the Jewish and Armenian experiences and highlighted challenges faced in educating the general public about the crime of genocide.

Professor Hannibal Travis gave the final presentation on "The Armenian Genocide as a Political Act and International Crime." He discussed the illegality of the crime of genocide under international law, including cases where the charge of genocide was applied retroactively. Travis gave an in depth account of crimes against humanity that have been heard in international courts and discussed avenues for Armenian efforts in this context.

Following the presentations, Batmasian opened the floor for questions. Several were asked of the panel leading to a lively and wide-ranging discussion. Armenian Assembly of America Executive Director Bryan Ardouny gave closing remarks and announced the launch of an online petition calling on President Barack Obama to affirm the Armenian Genocide in his upcoming statement commemorating the 100th anniversary. After the symposium, guests were invited up to view a brand new exhibit entitled "Iconic Images of the Armenian Genocide," that was on full display during and after the discussion.

"We were pleased to bring this expert panel together for the South Florida community," stated Bryan Ardouny. "The Assembly is grateful to Dr. Adalian, Dr. Gatens, Professor Travis, and Mrs. Batmasian for their insight and compelling presentations," Ardouny said.