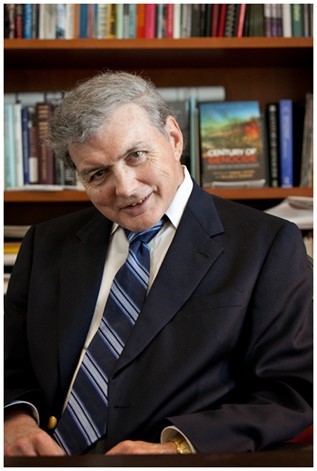 WASHINGTON, D.C. - Earlier this year, the National Academy of Sciences of the Republic of Armenia's Armenian Genocide Museum-Institute awarded William S. Parsons with the Ambassador Henry Morgenthau Medal on behalf of the government of Armenia, reported the Armenian Assembly of America (Assembly). In a formal ceremony at the Embassy of the Republic of Armenia on the evening of December 10, Armenian Ambassador to the U.S. Tigran Sargsyan presented the award to Parsons for his exceptional service to humankind through education on the Armenian Genocide and the the defense of human rights.

William S. Parsons worked at the United States Holocaust Memorial Museum (USHMM) for 25 years where he served as chief of staff and director of education. Prior to joining USHMM, he co-founded Facing History and Ourselves, an organization that specializes in training teachers in human rights education in order to help students confront the lessons of genocide and the Holocaust, and learn the value of tolerance. Facing History and Ourselves developed the first national curriculum on the Armenian Genocide in the U.S., which serves as the template for all educators today.

"It was my great honor to participate in the awarding of a longtime friend of the Armenian people," stated Armenian National Institute (ANI) Director Dr. Rouben Adalian. "Perhaps no other person in the United States has done more and achieved more as a human rights educator than William Parsons," added Dr. Adalian.

Parsons has reached thousands of teachers across the United States and around the globe. He co-authored the teachers' resource book Facing History and Ourselves: The Holocaust and Human Behavior. He also co-edited, along with other significant educators, Centuries of Genocide: Essays and Eyewitness Accounts, which has gone into its fourth edition and sold tens of thousands of copies, making it the most popular college textbook on human rights and genocide.

The Secretary of the Republic of Armenia State Commission for the Centennial sent a letter accompanying the award.

"I am very pleased that William Parsons has received this significant award and recognition from the Armenian government for his pioneering efforts in Armenian Genocide and Holocaust education," stated Assembly Board of Trustees Vice Chairman and Counselor Aram Kaloosdian. "I had the pleasure of serving with him on the ANI Academic Council and will always remember his dedication and perseverance in the fight against denial of the Armenian Genocide," Kaloosdian said.

At the Armenian Embassy reception, Ambassador of the Republic of Armenia to the U.S. Tigran Sargsyan also honored Maryland entrepreneur Boris Ghazaryan with the Prime Minister's Medal.

In addition to the award ceremony, Ambassador Sargsyan welcomed the Nagorno Karabakh Republic (NKR) Foreign Minister Karen Mirzoyan to the United States. Mirzoyan was visiting Washington as part of a 3-day working trip where he spoke at the annual Nagorno Karabakh/Artsakh independence celebration on Capitol Hill and met with U.S. government officials, Members of Congress, and the Armenian Assembly of America.