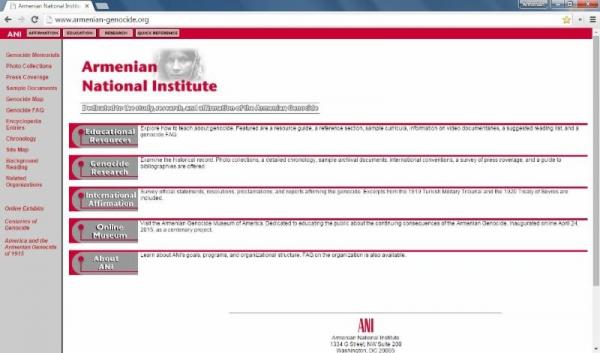 WASHINGTON, D.C. - The Armenian National Institute (ANI) announced the completion of a major expansion of its heavily-used website. ANI updated one of the central features of the site which is widely consulted and provides an extensive catalogue of affirmation records from around the world.

As the spate of recognition and affirmation of the Armenian Genocide picked up pace with the centennial commemorations, ANI focused on obtaining the official documents attesting to this new international reality.

The documents from countries that entered the list formally recognizing the Armenian Genocide in 2015 were also augmented with official copies of declarations from prior years allowing the public to view the actual documents as well as have easy access to their text.

Under the category of States and Provinces, the ANI website provides dozens of state-level resolutions and declarations from nine countries, including Argentina, Australia, Brazil, Canada, Italy, Spain, Switzerland, United Kingdom, and the United States. For the U.S., records from 44 states referencing the Armenian Genocide are reproduced, while countries like Spain and the UK are represented even as their central governments remain off record.

With important statements issued in April by heads of states and major religious and public institutions, these have been organized into new categories for easy access, such as International Organizations, Religious Institutions, and Heads of States, Parliaments, and Presidential Statements. A separate page reproduces all the April 24 and related statements issued by presidents of the United States from Woodrow Wilson to Barack Obama.

Many other sections of the ANI website were expanded including Education, Press Coverage, and the Memorials database. Some 200 Armenian Genocide memorials in 32 countries are identified, along with basic information about their location, designers, sponsors, and other features.

Because of popular interest in the exhibits which display hundreds of historic photographs, they have been made available through the Armenian Genocide Museum of America (AGMA) and Armenian Assembly of America (Assembly) websites as well. The digital exhibits are being continuously utilized and some quarter million copies have been downloaded to date.

The success of these new products has continued to sustain ANI as the leading institution providing information about the Armenian Genocide. Moreover, the combined addition of new resources on the ANI website has exponentially expanded the number of visitors. In 2013, the statistics jumped from 2 million hits to 3 million. In 2014, over 3 million hits were registered, and in 2015, over 4 million hits have been reached.

Through the ANI website visitors can also see the online museum launched by AGMA on April 24, 2015. The new interactive site includes an introductory video and a dynamic narrative that features survivors, background music, and significant imagery. The AGMA site is slated for expansion in 2016 and the second phase of the project will include mobile-friendly access for visitors. The site is envisioned to contain the entire story of the Armenian Genocide through expandable galleries.

The ANI website also served as a major resource for media from around the world to help provide coverage of the centennial commemorations. Nearly all global media paid close attention to the meaning of the centenary of the Armenian Genocide, with The Daily Mail in England, as an example, which has a circulation of 1.4 million and is believed to have a readership of 3 million, making extensive use of the historic images available from ANI.

"We want to thank all those who have sent ANI information about developments in their countries, whether new recognitions, the construction of memorials, or the release of noteworthy publications," stated ANI chairman Van Z. Krikorian. "They all help maintain the ANI website as a central location for making this valuable data available to students, teachers, and the general public. The work that Rouben Adalian has done from the inception of this website is truly remarkable, and the fact that it is cited so prominently and often is a real achievement."

"I especially need to thank the Armenian Genocide Museum-Institute in Yerevan and the Armenian Foreign Ministry for being helpful in retrieving many of the valuable documents posted on the ANI site where the collective effort of the Armenian people on the occasion of the of the centennial of the Armenian Genocide can be viewed and appreciated," added ANI Director Dr. Rouben Adalian. "I also want to note the contributions of interns and volunteers who pitched in at ANI, most notably Karina Demircyan and Mariam Khaloyan for their dedication and participation in this effort by helping to expand the ANI website, and our longtime webmaster Mark Malkasian for his standing commitment to our goals," Adalian said.

Founded in 1997, the Armenian National Institute (ANI) is a 501(c)(3) educational charity based in Washington, DC, and is dedicated to the study, research, and affirmation of the Armenian Genocide.