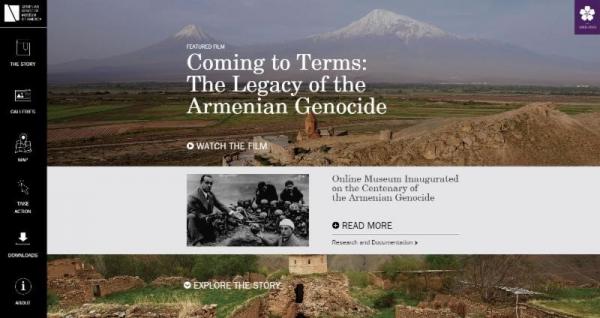 The interactive site invites visitors to explore the story of the Armenian people and its fateful experience in 1915. The site is currently optimized for laptop and desktop computer viewing, with full mobile device, as well as the addition of galleries, scheduled for later this year.

Presenting the Armenian Genocide from multiple perspectives, the online museum highlights the role and extent of American involvement in denouncing the atrocities committed against the Armenian people during World War I and in delivering the humanitarian aid that rescued the remaining survivors from further mistreatment.

The online museum begins with an exploration of the rich culture of the Armenian people created over millennia to underscore the gravity of the loss of an entire civilization with the destruction of historic Armenia.

The enormity of the human losses during the Armenian Genocide are set against this background to stress the relationship that once existed between the Armenian people and their now decimated homeland. It reveals the extent to which the places once associated with worship and celebration, with commerce and education, and the historical memory of significant events from the time of the Armenian monarchies, have been erased from the face of the earth.

By underlining with resonant content the historic identity of the Armenian people, their art and culture, and their perseverance in the face of adversity, the online museum also reinforces the universal message of our common humanity and collective responsibility, and explains why the story of the Armenians and other peoples who have suffered similar fates must be told.

The museum is also dedicated to educating the public about the continuing consequences of the Armenian Genocide. Viewers will learn how the international community's failure to condemn the genocide and hold the perpetrators accountable made the Armenian Genocide a prototype for later crimes against humanity.

An instructional video introducing the entire online museum explains the Armenian Genocide in the context of a century and more of mass atrocities around the world and examines the role of American leadership in responding to the problem of genocide.

The introductory video as well as the online exhibits feature the oral testimony of survivors supported with pictorial and other documentary evidence.

The online museum also confronts the Turkish government's denial policy by recalling the late Hrant Dink's heroic and singular role in exploring avenues for creating a common ground for understanding.

The title of the introductory video, "Coming to Terms," echoes the expression that has become the international theme of the centennial as governments and world leaders join Armenians around the world on calling upon Turkey to face up to the evidence. It urges the Turkish authorities, civil and political, to acknowledge this shameful chapter in history and take bold and honest steps toward putting the legacy of the murderous Young Turk regime once and for all behind them.

In the spirit of cooperation to pay due respect to the victims of the Armenian Genocide, many individuals and organizations joined with AGMA in supporting the creation of the online museum and its many components. Among them are the Armenian Film Foundation, Zoryan Institute, Armenian Genocide Museum-Institute, and Armenian Studies Program at the California State University in Fresno. They augmented the resources available from the United States National Archives, the Library of Congress, the Republic of Armenia National Archives, and Armenian General Benevolent Union's Nubarian Library, among others. AGMA also extends special thanks to film makers Carla Garapedian and Ted Bogosian, as well as historian and geographer Dr. Robert Hewsen.

AGMA also thanks with particular appreciation the renowned photographer Hrair Hawk Khatcherian whose commitment to documenting the cultural and religious heritage of Armenians across their historic homeland and the diaspora is on display through the magnificent photographs he shared with AGMA and which form such a central part of the visual experience of visiting the online museum.

Joining Hrair Khatcherian in making the online museum an exceptional experience is the soulful musicianship of Gevorg Dabaghyan, enveloping viewers with haunting melodies from the mountains of Armenia. He continues the unique tradition of composing and playing music on the national instrument of Armenia, the duduk, made from the native apricot tree. AGMA is honored to feature Mr. Khatcherian's and Mr. Dabaghyan's exemplary and unequalled artistry.

The AGMA online museum is being produced by the museum planning and exhibit design firm of Gallagher & Associates which has been working with AGMA, ANI, and Assembly staff and board members to bring the concept of an Armenian Genocide museum to the public since the start of the project. Its video production wing prepared "Coming to Terms: The Legacy of the Armenian Genocide" under the direction of Mike Buday.

The Armenian Genocide Museum of America is a joint effort by the Armenian Genocide Museum and Memorial Inc., the Armenian Assembly of America, and the Armenian National Institute. Its online museum offers a place for reflection and learning filled with hope, inspiration, and a commitment to eradicating the scourge of genocide through education and a focus on prevention. Interactive tools in the narrative galleries allow visitors to navigate at their own pace across the many features of the online museum, which will be expanded over the coming months.