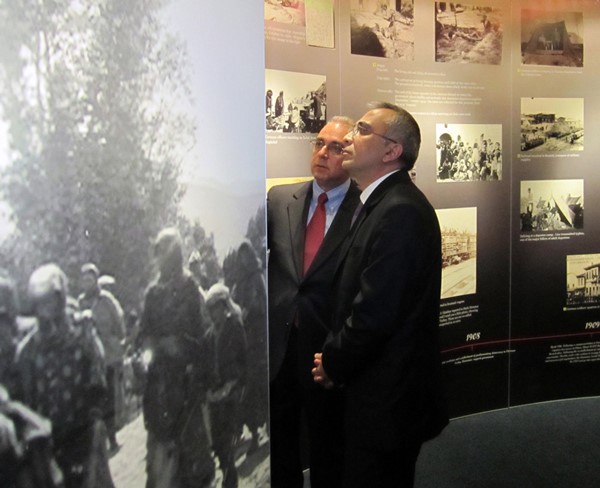 Washington, DC - Armenia's Ambassador to the United States Tatoul Markarian, Armenia's Deputy Minister of Culture Artur Boghosian, Reverend Michael Wilker of the Lutheran Church of the Reformation and His Eminence Archbishop Vicken Aykazian, Legate of the Armenian Apostolic Church in Washington presided over the formal opening April 18 of the exhibit "Witnesses to the Armenian Genocide," hosted by the Lutheran Church of the Reformation on Capitol Hill.

"It is a special honor for the Lutheran Church of the Reformation to host this unique exhibit about the Armenian Genocide," stated Reverend Wilker in his welcoming remarks. "I am specially moved by the theme of witnessing, and of speaking up in defense of our fellow human beings in need of our care and attention. The Armenian people suffered the ultimate sacrifice on behalf of their faith and their culture. As the oldest Christian nation in the world, their martyrdom as a people represents the worst that humans can do to another, and the best of the spirit of humankind to resist and overcome evil."

Special mention was made on the occasion of the exhibit's formal opening thanking Mrs. Rita Balian, who, with her late husband Vartkess Balian, initiated the preparation of the panel exhibit and generously contributed to make it a reality.

The research to uncover the rare photographic material displayed was conducted by Dr. Hilmar Kaiser in several German and European archives. Photographic evidence on the Armenian Genocide is extremely rare. Although Imperial Germany and the Ottoman Empire were military allies during World War I, the Ottoman Turkish authorities responsible for the Armenian Genocide prohibited taking pictures and closely watched anyone suspected of owning a camera. Despite the threat of a court martial, several German civilians and other German military officials assigned to the Ottoman Empire during the war disregarded the ban and secretly photographed the mistreatment of the Armenian population.

Dr. Kevork Bardakjian, Marie Manoogian Professor of Armenian Language and Literature at the University of Michigan, Ann Arbor, who was a featured speaker at the Library of Congress the following day, also visited the exhibit. He was joined by former U.S. Ambassador to Armenia John Evans. Dr. Bardakjian, who is the author of the book Hitler and the Armenian Genocide, published by the Zoryan Institute in1986, commented: "Adolf Hitler's chilling reference to the extermination of the Armenians continues to haunt all who specialize in genocide studies. In researching the evidence on Hitler's knowledge of the fate of the Armenians, I was surprised to discover that he referred to them more than once. This exhibit is visual proof of the extent of knowledge among German officials of the Ottoman policy of extermination. Could there be more compelling evidence than Ottoman Turkey's own allies on the ground testifying to the atrocities committed against the Armenian people."

For viewing information or to arrange for a group tour, please contact Dr. Rouben Adalian at 202-383-9009.

The Armenian Genocide Museum of America is an outgrowth of the Armenian Assembly of America and the Armenian National Institute (ANI), catalyzed by the initial pledge of Anoush Mathevosian toward building such a museum in Washington, DC.