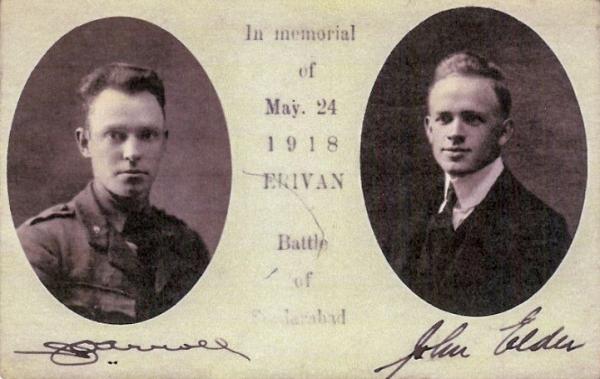 WASHINGTON, D.C. - The YMCA welcomed the April release of the special digital exhibit issued by the Armenian National Institute (ANI) exploring the role of two exceptional individuals, who volunteered to stay in Armenia during the critical year of 1918 when fellow American relief workers were withdrawn in view of the intensification of warfare in the region.

The ANI exhibit profiles the two Americans, John Elder and James O. Arroll, sent to Armenia by the YMCA, and explains their numerous contributions towards relieving the humanitarian crisis in April and May 1918 when the armed forces of Ottoman Turkey invaded the country. Based on John Elder's photographs and testimony, as well as additional material from the YMCA Archives, the exhibit pays tribute to the extraordinary efforts of these two men, whose achievements were widely recognized at the time.

Ryan Bean, Reference and Outreach Archivist at the YMCA Archives, who supported the project, remarked: "The Armenian National Institute has done a fantastic job telling this story. It is both tragic and heartbreaking on the one hand, and inspiring and humbling on the other. The timeliness of this exhibit is very appropriate, and I believe we could all learn a lesson from Elder and Arroll."

In its April 24 posting on its Facebook page, where the exhibit could be viewed, the YMCA Archives extends "Congratulations to Dr. Rouben Adalian and the Armenian National Institute on the release of the digital exhibit 'The Critical Role of the YMCA and American Relief in Armenia a Century Ago.' This exhibit both illuminates a tragic humanitarian disaster as well as highlights the capacity of the human spirit to persevere and do good in the face of a seemingly hopeless situation."

Vardan Hambardzumyan, who heads the YMCA in Armenia and presently serves as Executive Secretary of YMCA Europe, wrote that he was "absolutely grateful to ANI for disclosing so eloquently the story of the YMCA in the Republic of Armenia back in 1918."

Elder and Arroll were in Armenia when the critical Battle of Sardarabad was waged in May 1918 securing the independence of the country. Working in Yerevan, Elder and Arroll focused on caring for orphans and refugees. Their contributions were recognized as critical under the circumstances, and their personal heroism, taking the risks that they did by remaining at their posts, was widely appreciated by Armenians. Celebrating their special role, a memorial postcard was issued in Yerevan featuring the two young Americans.

John Elder recorded the hair-raising news from the battlefront in his journal, describing, blow by blow, the major developments of the day. On April 30, he wrote: "Discouraging news from Tillis. The British staff preparing to leave. We were advised to leave at once." On May 16, he asked: "Has the end come at last? Official telegrams report that the Turks are bombarding Alexandropol [Gyumri]...The Turks have cut the railroad on both sides of Alexandropol, which means we are cut off from funds." On May 21, he reported: "Alexandropol has fallen. The Turks demand the railroad to Julfa in order to transport their troops, and the Armenians are prepared to give it." Two days later, on May 23, he gloomily wrote: "The storm clouds are rapidly approaching Igdir, only 25 miles away is reported in Turkish hands, so things look desperate."

On May 26, he jotted down a different kind of news: "Well you never can tell what may happen. Just as the end seems at hand the pendulum swings the other way and the terrible Turk is in full retreat...After a two day battle at Sardarabad the Turks have been completely routed."

With the establishment of peace, John Elder witnessed the momentous event of the restoration of government, which he appreciated for its historic importance, recording on August 11: "I had the thrill of attending the opening session of the Parliament of the Republic of Armenia. What an exciting time it was. A free and independent Armenia for the first time in 600 years or more! There was a great crowd present, and through an interpreter I gave an address of congratulations on the historic occasion."

After more than a year of strenuous effort, described in detail in the exhibit, John Elder received a letter from John R. Mott, General Secretary of the International Committee of the YMCA in New York, applauding his outstanding record of service and expressing concern for his well-being. The letter begins with reference to Dr. Clarence D. Ussher "testifying to the very high value of the service which you have rendered in Armenia." The story of Dr. Ussher was covered in a digital exhibit previously issued by ANI under the title "The First Refuge and the Last Defense: The Armenian Church, Etchmiadzin, and the Armenian Genocide."

All of the digital exhibits posted on the ANI website are freely downloadable, and are provided to the public in high resolution to be readily printable anytime and anywhere from standard-size up to poster-size.