U.S. AMBASSADOR TOURS ANI EXHIBIT ON YMCA DURING THE FIRST REPUBLIC OF ARMENIA 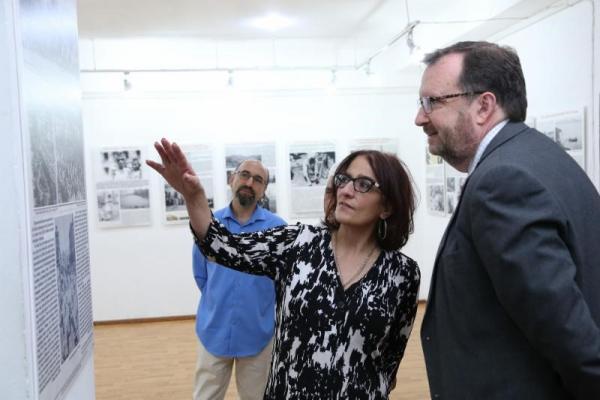 YEREVAN - The United States Ambassador to the Republic of Armenia, Richard M. Mills, Jr., recently toured the exhibit, sponsored by the Armenian National Institute (ANI) and the Armenian Assembly of America (Assembly), depicting the critical humanitarian role played by two courageous American YMCA officials during the first republic of Armenia.

On display at the Naregatsi Art Institute in Yerevan, the exhibit, entitled American Relief in the First Republic of Armenia, was created by ANI to commemorate the 100th anniversary of the Armenian Republic. The exhibit highlights the role of the YMCA pair of John Elder and James O. Arroll, who rendered exceptional service during the critical early months of the republic in 1918 when a severe humanitarian crisis gripped the newborn country as it struggled with the consequences and violence of World War I.

"This exhibition captures the spirit of the American people's affinity for Armenia and the Armenian people," said U.S. Ambassador to Armenia Richard M. Mills, Jr. "From those first YMCA volunteers to the more than 1,000 Peace Corps volunteers who have followed in their stead, the American people have been working side-by-side with the Armenian people to overcome turmoil and challenge in pursuit of continued peace and friendship between our two nations."

The exhibit also expressly links the early contributions of the YMCA and other relief workers, who subsequently arrived from the United States in 1919, with the current role of the Peace Corps which has been sending volunteers to Armenia since 1992. Ambassador Mills, whose long association with Armenia began since serving as the State Department's first Armenia desk officer upon the restoration of Armenian independence in 1991, has been a strong supporter of Peace Corps programs across Armenia.

The exhibit opening and associated events were organized by the Armenian Assembly's Yerevan office, spearheaded by Regional Director Arpi Vartanian. The exhibit was launched on August 8 with the participation of Armenia's Minister of Education Arayik Harutyunyan and other officials, as well as representatives of the U.S. Embassy. Upon stirring renditions of the Armenian and American national anthems by New York Lyric Opera soprano Anoush Barclay, U.S. Chargé d'Affaires Rafik Mansour made a compelling statement honoring the memories of John Elder and James O. Arroll for "their American idealism, their connections, and their business savvy."

The YMCA in Armenia was represented by a contingent of young members from around the country, as well as YMCA Armenia Acting Director Khoren Papoyan in addition to YMCA Europe Programmes Executive Secretary Vardan Hambardzumyan. Joining them were Peace Corps volunteers, who work with YMCA volunteers in Armenia's regions, and other aid workers. Former Artsakh Foreign Minister Karen Mirozyan, Knights of Vartan Yerevan Liason Gohar Palyan, Near East Foundation-Armenia Representative Arpine Baghdoyan, ABGU Armenia President Vasken Yacoubian, ArmComedy Live's Narek Margaryan, Artists' Union of Armenia Director Karen Aghamyan, Aida Khachikyan from the Hayastan All-Armenia Fund, Shant Hovnanian of Hovnanian International, and Sergei Paradjanov Museum Director Zaven Sargsyan, a professional photographer who has documented historic Ani, visited the exhibit. Armenian Assembly summer interns in Armenia along with their families and supervisors also joined the event. The Vozkevaz Winery, which has been in existence since 1932, donated refreshments for the reception.

Addressing the audience, ANI Chairman Krikorian encouraged YMCA members, Peace Corps participants, and others engaged in humanitarian services to see themselves in the eyes of the volunteers from 100 years ago.

Upon the conclusion of the display, the ANI exhibit will travel around Armenia and to Artsakh. ANI and the Armenian Assembly are donating the poster set to YMCA Armenia. The YMCA organizations in cities across the country, such as Gyumri, Spitak, and Vanadzor, will bring the story of the original arrival of the YMCA, and heroic tale of Elder and Arroll, to an even wider public. For Armenian audiences, the 24-panel exhibit was augmented with a two-panel Armenian-language introduction summarizing the key events and personalities highlighted in the story. Along with the support of the YMCA of the USA, preparation of the ANI exhibit was strongly encouraged by the YMCA leadership in Armenia and Europe which previously shared the announcement upon the original release of the digital version of the exhibit in April of this year. YMCA Europe shared the news of the display of the exhibit in Yerevan with its audiences on its website.

The exhibit reconstructs the story of the near superhuman efforts undertaken by John Elder and James O. Arroll to rescue Armenians from the many perils they faced during the 1918-1920 independent Republic of Armenia. The exhibit relies upon John Elder's own words from his published journal, along with original records that he personally saved from the time of his service, and the photographs that he made and captioned.

Elder and Arroll arrived as two enthusiastic young men dedicated to the purpose of sustaining morale among soldiers enduring long campaigns and treacherous conditions as the Great War kept grinding on, year after year, without end. They departed as two celebrated heroes who stood by the Armenian people at the fateful hour. John Elder wrote on May 26, 1918, as Ottoman Turkish forces advanced to the outskirts of Yerevan: "You never can tell what may happen. Just as the end seems at hand the pendulum swings the other way...After a two-day battle at Sardarabad, the Turks have been completely routed." With the decisive battle won, two days later, on May 28, 1918, Armenia declared independence.

The only Americans in Yerevan at the time, Elder and Arroll witnessed momentous events and the unfolding of a heart-wrenching humanitarian disaster as the ravages of war were revealed once the fighting stopped. A year elapsed before a new crew of relief workers reached Armenia to lighten the burden that Elder and Arroll shouldered. In the meantime, their efforts and accomplishments had become legend among admiring Armenians and fellow Americans at home.

The exhibit displays 95 images, 64 from John Elder's photo collection, 8 contemporaneous records and documents, and 4 maps. With 32 quotations from Elder's journal authenticating the photographs, along with introductory and explanatory text, the exhibit opens a window into life during the first year of the newly independent Armenian republic in 1918. The exhibit includes the entire set of photographs Elder attributed to his time in Armenia.

Other American personalities in the region appearing in the exhibit include F. Willoughby Smith, U.S. Consul in Tiflis, who supported the efforts of the relief workers; Robert McDowell, who was at the front when the Turkish forces broke through and invaded Alexandropol (Gyumri); Dr. John H.T. Main, president of Grinnell College in Iowa, who witnessed the horrific conditions in Armenia firsthand on behalf of the American Committee for Relief in the Near East; missionary Grace Knapp; and John Mott, longtime president of the American YMCA, who, with the encouragement of his friend President Woodrow Wilson, dispatched young Americans wherever they could lend civilian support behind the front to men in combat.