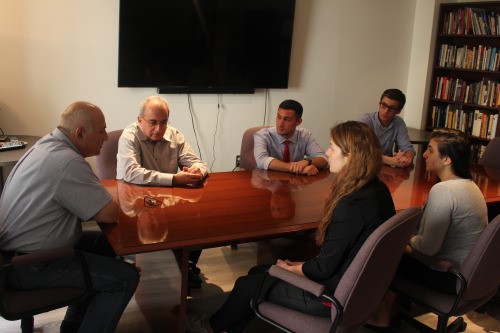 WASHINGTON, D.C. – On July 11, Dr. Harutyun Marutyan visited the Armenian National Institute (ANI) and spoke with the Armenian Assembly of America (Assembly) interns as well as ANI Director Dr. Rouben Adalian. Dr. Marutyan was invited to Washington, D.C. as a guest of the Smithsonian Institution to participate in their Folklife Festival, which is held annually on the National Mall.

Dr. Marutyan spoke to the interns about the transformation of Armenian national identity, the survivors’ memory of the Armenian Genocide, modern national movements, iconography, and traditional Armenian culture. He emphasized the importance of a new ideology regarding the recognition of the Armenian Genocide. Most importantly, he focused on the attitude of the younger generations and the message for the future. He is the author of three monographs and more than a hundred scholarly articles, as well as his book entitled Iconography of Armenian Identity: The Memory of Genocide and the Karabagh Movement, published in 2009. He is also the recipient of the President of the Republic of Armenia Prize for his valuable contribution to the recognition of the Armenian Genocide.

“As a former intern with the Armenian National Institute, it was refreshing to hear about Dr. Marutyan’s progressive approach towards international recognition of the Armenian Genocide. After coming across many of his articles, it was truly an honor to meet the author himself,” Assembly Intern Coordinator Mariam Khaloyan said.

Dr. Marutyan is a leading research fellow at the Department of Contemporary Anthropological Studies at the Institute of Archaeology and Ethnography, National Academy of Sciences of Armenia, a visiting professor of Anthropology at Yerevan State University, and was previously a Diane and Howard Wohl Fellow at the United States Holocaust Memorial Museum (USHMM). For his Diane and Howard Wohl Fellowship, Dr. Marutyan conducted research for his project “Memory Based on Politics: Comparative Study of Jewish and Armenian Experience.” He is also an IREX/RSEP (Michigan University, 1998), Fulbright (MIT, 2003-2004) and DAAD (Berlin, 2013) alumnus.