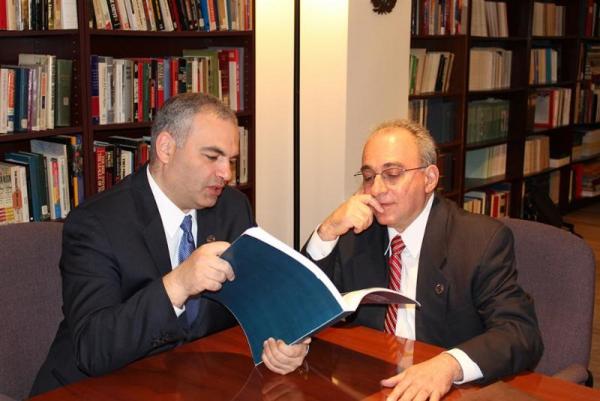 "The opening of an Armenian information center in Washington is a very important event. The opening of such a center in the US capital is a major achievement by itself," Demoyan said.

"ANI is grateful to Dr. Demoyan for joining us at the launch of the first phase of our research center and the opening of the Armenian Genocide Library. In this space, researchers will have access to a specialized collection acquired by the Armenian National Institute and the Armenian Assembly of America over the past 40 years," ANI Director Dr. Rouben Adalian stated.

Thanks to the donation of a full set of audio-visual equipment installed in the ANI library, visitors can also experience a large screen viewing of the online Armenian Genocide Museum of America (AGMA), as well as other recordings and productions in various formats from around the world.

ANI's Armenian Genocide Library is just one component of a research center that will feature several substantial collections facilitating the process for historians and scholars to retrieve more documentation about the Armenian Genocide.

Earlier this year, ANI also launched a Turkish language version of its very popular Armenian Genocide website to provide further access for Turkish-speaking audiences. Mobile friendly versions of the ANI and AGMA websites were launched within the past year.

"There are a lot of plans in the works for the Armenian National Institute to be as accessible as possible for any type of scholar interested in learning more about the Armenian Genocide. ANI's collection will continue to expand, as well as the various channels and languages to share this information," ANI Chairman Van Z. Krikorian added.

Later that evening, the Armenian Assembly of America co-hosted an Armenian Genocide Commemoration on Capitol Hill, where Dr. Demoyan participated and gave remarks.

"Whether it is the annual statement of the President of the United States issued on Armenian memorial day, or the floor statements made by Congressmen and Senators each April, these are important reminders that the problem of genocide continues to haunt humankind and that remembrance is a form of prevention. To forget the past, deny the facts, and distort history are all methods of burying the crimes committed against humanity, and by so doing providing excuses for the repetition of such crimes," Demoyan said. "I thank the organizers of this Capitol Hill commemoration and express my deep respect for the Congressional Caucus on Armenian Issues for their commitment and friendship toward the people of Armenia," he continued.