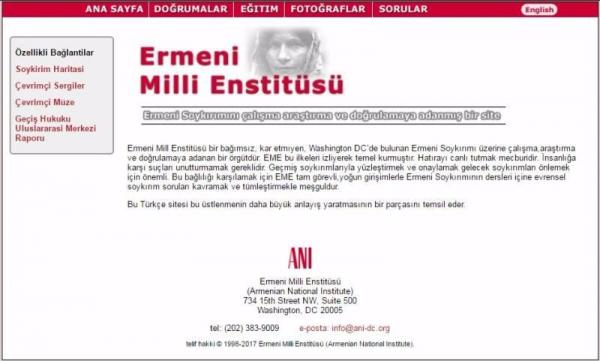 Washington D.C. - On February 27, the Armenian National Institute (ANI) launched a Turkish-language version of its popular website documenting the facts and acknowledgments of the Armenian Genocide available at www.turkish.armenian-genocide.org.

The ANI site is visited over four million times a year and the number of people accessing from Turkey is substantial. As Turkey regularly censors foreign and domestic websites and the ANI English site has been hacked by denialists, the new ANI Turkish site was designed to give access to broader Turkish-language audiences, both in the Republic of Turkey and outside. The Turkish-language site will parallel many of the most commonly used features of the ANI site. For its first phase, the Turkish site features translations of official documents from countries around the world that formally recognize the Armenian Genocide.

The resolutions, laws, and declarations from countries that have historically recognized the Armenian Genocide can now be read in Turkish. They range from the May 24, 1915 Joint Allied Declaration that invoked crimes against humanity at the time the genocide was being committed to more recent parliamentary resolutions, including the 2016 German Parliament resolution that recognized the historic events and admitted German responsibility in the matter. Earlier this month the Federal Constitutional Court of Germany upheld the validity of the resolution.

"The Turkish-language ANI site looks forward to contributing toward dialogue by paving one more path to a common understanding of history and by taking one more step toward a reconciliation cognizant of the consequences of the past while building forward toward a future where neighboring nations live in peace," stated ANI Chairman Van Z. Krikorian.

Audiences in Turkey are also unaware of the voluminous Turkish records that confirm the facts of the Armenian Genocide. In 2004 the proceedings and legal analysis by the International Center for Transitional Justice (ICTJ), commissioned by the Turkish Armenian Reconciliation Commission, was published in Turkish and several books have appeared in print since, but there is a massive gap in resources for Turkish speakers.

The ICTJ legal opinion in Turkish is available on the new website, which also includes a Frequently Asked Questions (FAQ) section and a photographic collection. Additionally, a section for entries from the Encyclopedia of Genocide addressing several aspects of the Armenian Genocide is currently under construction.

The site will have new features that will be of particular interest to Turkish readers. The Institute is looking forward to expanding the site in the same systematic manner and by the same objective standards by which the ANI site was created.

"Many courageous individuals have spoken up and some brave scholars have pioneered groundbreaking research documenting the Armenian Genocide on the basis of official Ottoman records. Despite the broad-ranging global dialogue on the historical importance and dark precedent of the Armenian Genocide, more progress in Turkey is necessary for Turks to understand and reconcile with their own real history," Krikorian added.

This policy continues to have serious domestic consequences. Recently Turkish parliamentarian of Armenian origin Garo Paylan was penalized with suspension from participation in three sessions of the legislature for daring to reference the consequences of the Armenian Genocide in Turkey itself.

His suspension in January arrived almost to the day of the tenth anniversary of the assassination of the Turkish-Armenian journalist Hrant Dink, a crime that remains in many ways unsolved. Dink's courage in raising awareness of the legacy of the Armenian Genocide in Turkey emboldened many others in the Turkish media to re-examine the issue, while it infuriated ultranationalists who took the law into their own hands.

The new site also features the ANI map keyed in Turkish, and links to other popular features, such as its digital exhibits and online museum.

ANI Director Dr. Rouben Adalian stated: "The Turkish site was created thanks to the support and encouragement of many contributors, including translators, consultants and web designers who helped to make this information on the Armenian Genocide accessible to readers in Turkey and elsewhere. New translations will be added very soon and we look forward to enhancing the site to reflect the vast amount of information on the Armenian Genocide already available on the ANI site."