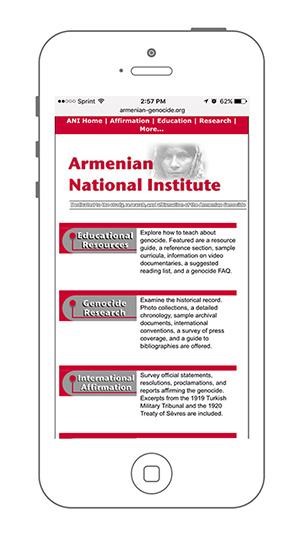 WASHINGTON, D.C. - The Armenian National Institute (ANI) is pleased to announce that its website (www.armenian-genocide.org) is now fully accessible on mobile devices such as tablets and smartphones. The Institute also announced the completion of another expansion of its heavily-used website, including the addition of twenty new documents affirming the Armenian Genocide. Many of the central features of the widely consulted website were also updated.

The updated website features the most recent affirmation records, such as the text of the German Parliament's Armenian Genocide resolution adopted on June 2, 2016, acknowledging the responsibility of the World War I-era German government. This resolution prompted an international discussion with the participation of honest and thoughtful Parliament Members of Turkish origin in the Bundestag who were threatened by opponents in Turkey. Relevant statements from the recent visit of Pope Francis to Armenia are also available, as well as the reporting from his trip in the Press Coverage section of the ANI website.

Under the category of States and Provinces, the ANI website provides dozens of state-level resolutions and declarations from nine countries, including Argentina, Australia, Brazil, Canada, Italy, Spain, Switzerland, the United Kingdom, and the United States. The U.S. category comprises records from 45 states acknowledging the Armenian Genocide, while countries like Spain and the United Kingdom are represented even as their central governments remain off the record.

The recently adopted legislation in the state of Michigan and Rhode Island which mandates the teaching of the Armenian Genocide is accessible on the ANI website. Michigan and Rhode Island join New York, New Jersey, Massachusetts, Illinois, and California in promoting the teaching of human rights courses inclusive of the Armenian Genocide in middle and high schools. Relevant curricula and many other instructional aides can be retrieved from the ANI website to facilitate the teaching of these courses.

The ANI Memorials database now contains information and images for over 200 sites dedicated to the Armenian Genocide in 32 countries and is continuously updated.

Through the ANI website, visitors can also see the online museum launched by AGMA on April 24, 2015. The interactive site includes the entire story of the Armenian Genocide through expandable galleries, along with dynamic narratives featuring survivors and significant imagery. Like the ANI website, the AGMA website is mobile-friendly and available for use on tablets and smartphones.

The success of these new products has continued to sustain ANI as the leading institution providing information about the Armenian Genocide. ANI takes this opportunity to recognize Mark Malkasian, its longtime webmaster who made the mobile-friendly version of the ANI website a reality. ANI also recognizes 2016 interns Robert Arzoumanian and Edward Barsoumian, as well as Mariam Khaloyan, 2016 Assembly Summer Intern Program Coordinator and 2015 ANI intern, who have been helping to upgrade the website.

Founded in 1997, the Armenian National Institute (ANI) is a 501(c)(3) educational charity based in Washington, DC, and is dedicated to the study, research, and affirmation of the Armenian Genocide.
###
NR#: 2016-03