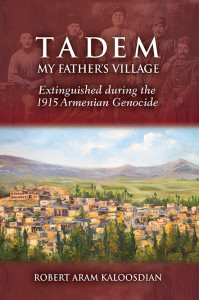 WASHINGTON, D.C. - The Armenian National Institute is pleased to announce that Robert Aram Kaloosdian's book, Tadem: My Father's Village Extinguished during the 1915 Armenian Genocide, was reviewed in the April 2017 issue of Holocaust and Genocide Studies, the premier journal of the discipline published by Oxford University Press on behalf of the United States Holocaust Memorial Museum. In his review, Robert Melson, past president of the International Association of Genocide Scholars, describes the book as a "significant contribution to historical understanding" of the Armenian Genocide.
Dr. Melson, also professor emeritus of political science at Purdue University, writes: "A graduate of Boston University's School of Law, Kaloosdian is the founding chairman of the Armenian National Institute, and one of the founders of the Armenian Assembly of America. He relies on a written chronicle of the village and on oral testimonies by elderly survivors, among them members of his own family, including his father Boghos."
Melson continues: "One of the historical questions that Kaloosdian helps to clarify...is the role of locals in the mass violence...Kaloosdian's research demonstrates that a potential for violence against Armenians at the local level existed even before the massacres of 1895-1896."
In her review which appeared in the Winter 2015 issue of the Journal of Levantine Studies, Dr. Nazan Maksudyan of Istanbul Kemerburgaz University wrote: "Kaloosdian has made a lasting contribution in reconstructing the experience of Tademtsis (people from Tadem) during and after the genocide." Maksudyan added: "Robert Aram Kaloosdian's Tadem, My Father's Village: Extinguished during the 1915 Armenian Genocide is an exceptionally rich local history of a rather small village, based mostly on oral histories, but also on memoirs and other published accounts. The book provides an almost complete picture of life before the genocide, with detailed population figures, census-like data on each family, socioeconomic background, and so on. Moreover, the book meticulously records the different phases of the genocidal process by presenting Tadem as a microcosm of the genocide."
The Journal of Levantine Studies is published by the Van Leer Jerusalem Institute, a center dedicated to the interdisciplinary study and discussion of issues related to philosophy, society, culture, and education.
While some would rather we deny, forget, or ignore the reality of the Armenian Genocide, the book serves as a countervailing force for truth and for remembrance. It further clarifies with heartbreaking sincerity, what it is that genocide entails. Because the book documents the tragedy at such impressively granular tracking, not just a village or community but also families and individuals, the reader is witness to the complex pattern in which genocide unfolds - often decentralized, and with a collection of differently motivated types of perpetrators. The message is particularly poignant in light of the current turmoil in the same region where slavery, forced marriages and conversions, and other forms of exploitation are seen playing out against a background of international inaction and apathy.
Kaloosdian stated the "voice that came forth in Tadem is from those villagers of Tadem who no longer have a voice. They were peaceful and agrarian, rich in culture but limited in resources, certainly posing no threat to anyone. The ruin of Tadem never needed to occur. They were not near a war zone. Tadem stands as a testament that religious hatred and racial prejudice are far more destructive than the weapons of war."
Kaloosdian's book had already received two awards in 2016. Tadem: My Father's Village was awarded an Independent Book Publishers Association's (IBPA) Benjamin Franklin Award as a Silver Winner in the Best New Voice Nonfiction category. The IBPA describes the book as follows: "Drawing on accounts from over a dozen witnesses, most never before published, the author recounts the life and death of one village. With striking immediacy, the author presents TADEM as a microcosm of the Genocide and argues that the Turks used the outbreak of World War I as a cover for atrocities motivated by religious hatred and greed."
Tadem: My Father''s Village also received an "IPPY" Silver award in the category of World History. The "IPPY" Awards, launched in 1996 and given out by the Independent Publisher Book Awards, are designed to bring increased recognition to the deserving but often unsung titles published by independent authors and publishers.
Founded in 1997, the Armenian National Institute (ANI) is a 501(c)(3) educational charity based in Washington, D.C., and is dedicated to the study, research, and affirmation of the Armenian Genocide.