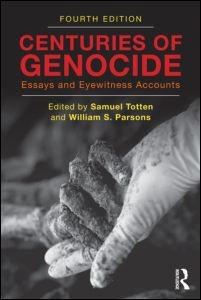 The chapter on the Armenian Genocide, which has appeared since the first edition of the publication, previously issued under the title Century of Genocide, is authored by ANI Director Dr. Rouben Adalian. For this new and expanded edition, the chapter was updated to reflect the growing scholarship on the subject.

The book is framed by an introductory essay that spells out definitional issues. To help readers learn about the similarities and differences among the various cases, each case is structured around specific leading questions. In every chapter authors address: Who committed the genocide? How was the genocide committed? Why was the genocide committed? Who were the victims? What were the outstanding historical forces? What was the long-range impact? What were the responses? How do scholars interpret this genocide? How does learning about this genocide contribute to the field of study?

Dr. Maureen Hiebert from the University of Calgary, who specializes in genocide, government, politics, and international law, described the publication as: "A welcome new edition to an already influential series, Centuries of Genocide adds new cases spanning the nineteenth to the twenty-first century and the four corners of the globe. Each chapter offers up-to-date research and analysis by some of the leading scholars in the field on the causes, processes, and aftermath of genocide, along with searing first-person eyewitness accounts that starkly illustrate the human experience, and tragic cost, of genocidal violence."

Dr. Ervin Staub of the University of Massachusetts at Amherst and author of Overcoming Evil: Genocide, Violent Conflict and Terrorism and The Roots of Evil: The Origins of Genocide and Other Group Violence, comments: "In this deeply humane book, fired by the passion of the editors and authors to understand the roots of genocides so that we can prevent this scourge of humanity, eminent experts give up-to-date accounts of 15 genocides. The scholarship of the authors is outstanding, the chapters in the book highly readable and compelling. While most of the chapters are about genocides in the 20th century, the book now contains chapters about genocides in the 19th century and the first genocide in the 21st Century. The personal accounts included truly reach the heart."

Co-editor of Centuries of Genocide William S. Parsons, who is Chief of Staff for the United States Holocaust Memorial Museum in Washington, DC, has devoted 30 years of his career to Holocaust education. In 1991, Parsons was invited to join the Museum's Education Committee to share his innovative ideas for teaching about prejudice and racism. He is also the co-author of the teachers' guide Facing History and Ourselves: Holocaust and Human Behavior.

Dr. Samuel Totten, University of Arkansas, Fayetteville, Professor of Curriculum and Instruction, has written extensively on teaching, preventing, intervening and documenting genocide. He is the author of Teaching About Genocide, Dictionary of Genocide, co-editor with Steven Jacobs of Pioneers of Genocide Studies, which included a contribution by Adalian, and was an associate editor with Adalian, Jacobs, and Eric Markusen of the Encyclopedia of Genocide under the chief editorship of Israel W Charny, Executive Director of the Institute on the Holocaust and Genocide in Jerusalem. Totten is also the co-founding editor of Genocide Studies and Prevention: An International Journal published by the University of Toronto Press and the Zoryan Institute. During the summer of 2004, Totten served as one of the 24 investigators with the U.S. State Department's Atrocities Documentation Project, interviewing black African refugees along the Chad/Sudan border in order to collect data for the express purpose of ascertaining whether genocide had been perpetrated in Darfur.

Centuries of Genocide includes the following chapters: Introduction by Samuel Totten and William S. Parsons; The Genocide of California's Yana Indians by Ben Madley; Genocide in Australia by Colin Tatz; The Genocide of the Herero and Nama in German South-West Africa, 1904-1907 by Dominik Schaller; The Armenian Genocide by Rouben Adalian; Soviet Man-made Famine in Ukraine by James E. Mace; The Holocaust: Jews, Gypsies, and the Handicapped by Donald L. Niewyk; Genocide in Bangladesh by Rounaq Jahan; Genocide in East Timor by James Dunn; The Cambodian Genocide, 1975-1979 by Ben Kiernan; Guatemala: Acts of Genocide and Scorched-Earth Counterinsurgency War by Susanne Jonas; The Anfal Operations in Iraqi Kurdistan by Michiel Leezenberg; The Nuba Mountains, Sudan by Alex De Waal; The 1994 Genocide of the Tutsi of Rwanda by Gerry Caplan; Genocidal Violence in the Former Yugoslavia: Bosnia Herzegovina by Martin Mennecke; and Genocide in Darfur, Sudan by Samuel Totten.

As part of its continuing service to educators and to coincide with the release of Centuries of Genocide, ANI has expanded its Resource Guide and other sections of the Education component of the ANI website. Dozens of resources selected for their instructional value are listed for the benefit of students and teachers. Educators interested in teaching about the role of American humanitarianism and involvement in responding to the Armenian crisis can also benefit from the recently issued fact sheet summarizing The United States Record on the Armenian Genocide: A Proud Chapter in American History, prepared by the Armenian Assembly of America.

Founded in 1997, the Armenian National Institute (ANI) is a 501(c)3 educational charity based in Washington, DC, and is dedicated to the study, research, and affirmation of the Armenian Genocide.