The Armenian Holocaust: A Bibliography Relating to the Deportations, Massacres, and Dispersion of the Armenian People, 1915-1923 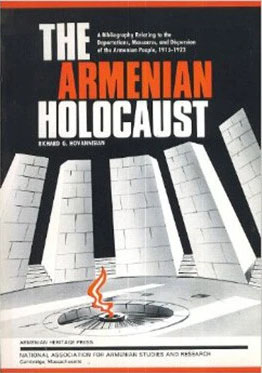 The Armenian Holocaust: A Bibliography Relating to the Deportations, Massacres, and Dispersion of the Armenian People, 1915-1923

"It is certainly no novelty that expediency may frequently prevail over morality in politics, but it is also no novelty that scholars and statesmen should strive toward truth and moral justice."

Description:
This work represents an extensive bibliography of archival materials and published studies in Western languages on the Armenian Genocide. The relevant documents in the archives surveyed number several hundred thousand. Part One of the bibliography contains a survey of archival materials. Included are the archives of the British Foreign Office and Cabinet Office, the French Ministry of Foreign Affairs and the Ministry of National Defense, the Foreign Ministry Archives of Austria-Hungary, and the Foreign Office Archives of Germany. Also surveyed are materials from the United States and Italy, in addition to several Armenian archival sources. Part two of the bibliography contains a broad selection of published works including: eyewitness accounts of non-Armenians, narratives of military personnel, political treatises, and reports on relief activities and appeals by relief organizations.