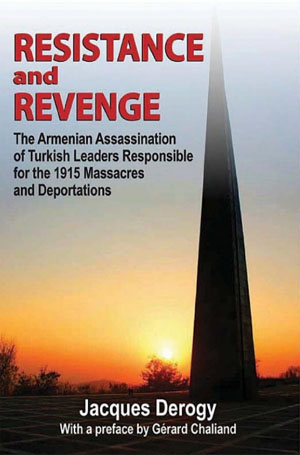 "Is it a matter of chance that in 1942, Hitlerite Germany restored Talaat's ashes to Kemal Ataturk's successor, who had them transferred to Istanbul with all the pomp reserved for the heroes of the fatherland? The remains of the former leader of the Young Turks, assassinated by Tehlirian in Berlin, have since rested in a mausoleum erected in 1943 on the Hill of Liberty. Each year, on March 21, the president of the [Turkish] Republic pays homage there to commemorate Talaat's 'martyr's death.'"

Description:
In a study of what was called Operation Nemesis, Derogy reconstructs the Armenian Revolutionary Federation's effort to seek retribution for the crimes committed against the Armenian people during the Genocide. The work explains the Turkish plans for the extermination of the Armenians and describes the individuals, themselves survivors, who were selected to liquidate the genocidists who had eluded justice. It richly details the mechanism created by the Armenians to implement their daring plan to avenge the atrocities by assassinating the Young Turk archconspirators whom they had to track down in their hiding places in Germany and elsewhere in Europe.