Starving Armenians: America and the Armenian Genocide 1915-1930 and After 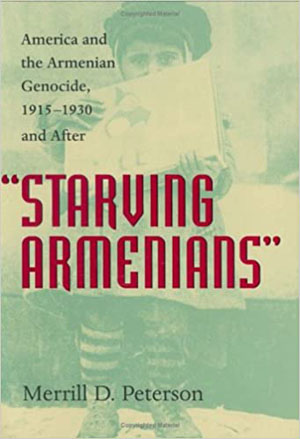 Starving Armenians: America and the Armenian Genocide 1915-1930 and After

"The wholly unprecedented American humanitarian response to the Armenian genocide, though soon forgotten, merits a permanent place in American memory. It lit a candle before ‘the blackest page in history' and sustained the surviving remnant of the Armenian people amid tumultuous waste and destruction."

Description:
In "Starving Armenians," Merrill Peterson explores the American response to the 1915 Armenian Genocide, beginning with the initial reports to President Wilson from his Ambassador to the Ottoman Empire, Henry Morgenthau, who described Turkey as "a place of horror." The West gradually began to take notice. As the New York Times carried stories about the "slow massacre of a race," public outrage over this tragedy led to an unprecedented philanthropic crusade spearheaded by Near East Relief, an organization rooted in Protestant missionary endeavors in the Near East and dedicated to saving the survivors of the first genocide of the twentieth century. The book also addresses the Armenian aspirations for an independent republic under American auspices; these hopes went unfulfilled in the peacemaking after the war and ended altogether when Armenia was absorbed into the Soviet Union.