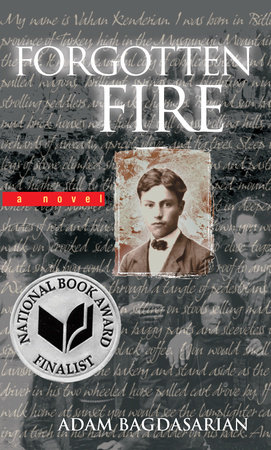 "I had not set foot beyond our garden wall in six months and was not prepared for what I saw. The street was deserted as far as the eye could see, and there was a silence I had never heard before on any street. Through open windows and half-open doors there was no sign of life, only gates waiting to be closed, walkways waiting to be swept."

Description:
Forgotten Fire is a novel based on the true story of an Armenian boy who survives the near-extermination of his race. It is 1915 and Vahan Kendarian, the pampered youngest son of one of the most influential Armenian families in Turkey, is confident that his privileged world will always include the house he loves, the laughter of his brothers and sisters, a sense of belonging. But when his uncle disappears and his father is taken away, when two brothers are shot before his eyes in the family garden, Vahan's world shatters... In the next three years he will become an orphan, a prisoner, a beggar, a servant; a stowaway in order to survive...Based on the experiences of the author's great-uncle during the Armenian Genocide, Forgotten Fire is the story of one boy's search for the survivor inside himself. It is the story of a lost nation and a powerful celebration of the resilience of the human spirit during the darkest of times.