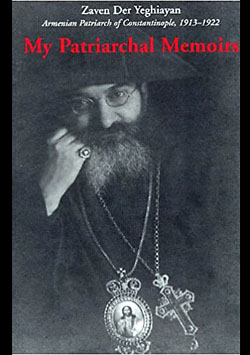 Description:
This book is the English-language edition of the Memoirs of Zaven Der Yeghiayan, the Armenian Patriarch of Constantinople during and in the aftermath of the First World War. The Memoirs cover the momentous years of his patriarchate, from his election in 1913 to his withdrawal in 1923-a traumatic period for the Armenian nation, a period marked by the disastrous rule of the Young Turks (Ittihadists) and their criminal legacy of annihilation of the Armenian population in Ottoman Turkey. It was a decade that saw the end of the Armenian people's presence in their ancestral lands-an end through dispossession, destruction, and obliteration of the memory of an ancient people in Turkey.

Copies are available at: http://mayreni.com/MPBookstore.html