An American Physician in Turkey 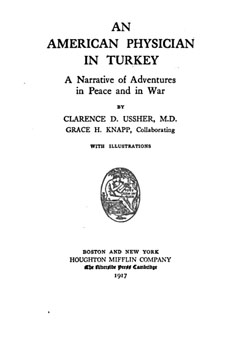 An American Physician in Turkey

"I speak of what I do know by the witness of my own eyes and ears, my own nerves quivering in sympathy with the torture of the people I have labored for, my own fellowship with their suffering."

Description:
Clarence Ussher wrote about his experiences as a missionary in Turkey during the Armenian Genocide. His testimony is vivid and compassionate. Ussher was a doctor who went to Turkey as part of the American Board of Commissioners for Foreign Missions (ABCFM) and worked at different missions throughout Turkey from 1898 through 1914. He reports on the conditions of the Armenians under Turkish rule as well as extensive descriptions of outbreaks of diseases like malaria, typhus, and cholera. His most important contribution is his narrative concerning the siege of Van at which he was present.

Copies are available through the Zoryan Institute at http://www.zoryaninstitute.org