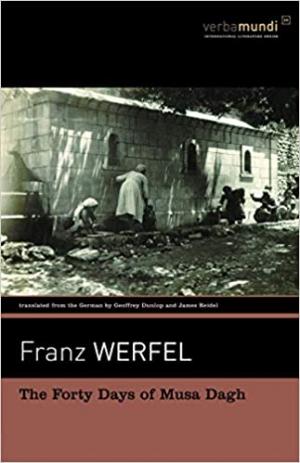 "The miserable sight of some maimed and famished-looking refugee children, working in a carpet factory, gave me the final impulse to snatch from the Hades of all that was, this incomprehensible destiny of the Armenian nation."

Description:
An epic novel that is among the most famous works on the Armenian Genocide. Originally written in German, it became an instant bestseller in 1933 and was translated into many languages. The author relates the heroic true story of the defenders of Musa Dagh, the Mountain of Moses, in Cilicia, along the Mediterranean coast. At the time of the deportations, the Armenian villagers, realizing the fate that awaited them, were determined to resist the Turks. They fled to the mountains and organized resistance. Poorly armed, and short on supplies, they held off the Turkish onslaught. At their bleakest hour, as the Turks were closing in on them, the defenders of Musa Dagh caught sight of a French warship off the coast. Signaling frantically, the Armenians managed to alert the French and, in a humanitarian gesture, were thus rescued. The book was conceived during the author's visit to Damascus in 1929, where he saw thousands of suffering Armenian survivors living in refugee camps.