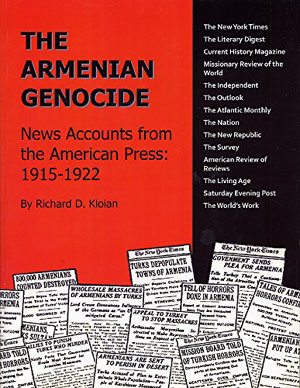 "The Committee on Armenian Atrocities, a body of eminent Americans which for weeks has been investigating the situation in Turkish Armenia, issued, yesterday, a detailed report of that investigation, in which it is asserted that in cruelty and in horror nothing in the past thousand years has equaled the present persecutions of the Armenian people by the Turks."

Description:
A compilation of over 200 articles from the New York Times, 68 articles from 14 other periodicals, reports from American Ambassador Henry Morgenthau from his post in Constantinople, and scores of accounts by American consuls, teachers, missionaries, German, Turkish, Italian, and Danish eyewitnesses, and Genocide survivors. Some of the articles also describe how the American public, once it learned of the Armenian tragedy, initiated humanitarian efforts to rescue the remaining Armenians from certain death by starvation.