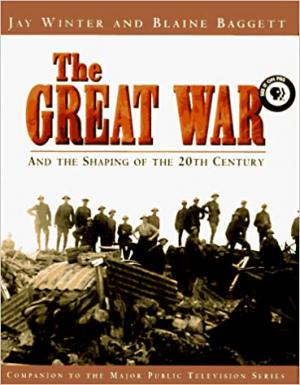 "The Armenian genocide opened a new phase in the history of warfare. Total war provided the context and the cover for a conspiracy by Turkish nationalists and the thugs they controlled systematically to deport, degrade and murder an entire people. That children were massacred alongside their elders shows that the crime was intended to wipe out the future as much as the present Armenian population."

Description:
Like the acclaimed television series that it accompanies, The Great War pays special attention to the troubling aftermath of the war: the emergence of new nations amid old and festering problems; how victims and survivors dealt with loss and disfigurement, guilt and hatred; and the terrible legacy of brutality that has marked so much of the twentieth century. In a chapter titled "The Cultivation of Hatred: Total War and Genocide," the authors analyze the fate of the Armenians in the context of World War I. They relate it to the mass slaughter of people during the course of the global conflict, while distinguishing the murder of the Armenians by noting: "It was in Armenia that the true meaning of total war emerged."

Learn more about The Great War at the PBS Web site.

A description of the accompanying video is available in the Instructional Videos section of the ANI Web site.