Revolution and Genocide: On the Origins of the Armenian Genocide and the Holocaust 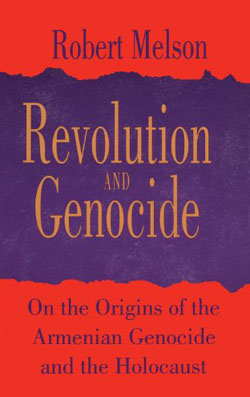 Revolution and Genocide: On the Origins of the Armenian Genocide and the Holocaust

"The Turkish revolution of 1908-23, while it redefined Ottoman Turkish identity, also had fateful consequences for Ottoman Armenians. For a transformation in the identity, ideology, and political myth of the majority group implies a change in how it views minorities. Once Ottomans became Turks, nationalists like Gokalp, Talaat, and Enver came to view Armenians in a fresh new light, not as an ancient millet but as aliens who did not belong among them."

Description:
In this detailed comparative history, Robert Melson elaborates a distinctive conceptual framework that links genocide to revolution and war. He suggests that some instances of genocide are products of a complex process started by the collapse of old regimes and carried forward by revolutionaries who wish to reconstruct society according to new ideological visions. Melson demonstrated how the Young Turks and Nazis, able to come to power after the fall of the Ottoman Empire and Imperial Germany, were motivated by Pan-Turkism, on the one hand, and racialist antisemitism, on the other. Desiring to create a Turkish empire free of Armenians and a Third Reich empty of Jews, the two revolutionary movements proceeded to commit genocide on a wide scale.