The Splendid Blond Beast: Money, Law and Genocide in the Twentieth Century 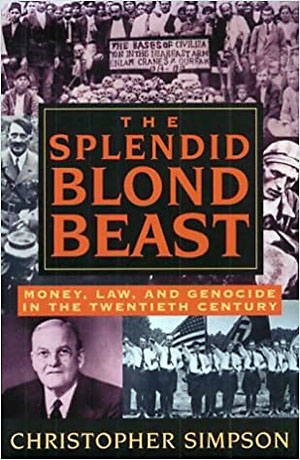 The Splendid Blond Beast: Money, Law and Genocide in the Twentieth Century

"The point was nonetheless clear. Western governments had discarded wartime promises of action against the Ittihadists who had murdered about a million people in order to help their political maneuvering over oil concessions in the Middle East. The dominant faction in Turkish society never accepted Armenian claims as legitimate, despite the strong evidence established by Turkey's own courts. In fact, the Turkish government even today continues to refuse to acknowledge Ittihadist responsibility for the Armenian massacres, and has instead in recent years financed a large and sophisticated publicity campaign aimed at rewriting the history of the war years."

Description:
Christopher Simpson traces the roots of mass murder as an instrument of state power, from the Armenian Genocide of World War I through Hitler's Holocaust. He shows how the existing structures of international law and commerce have at critical points actually encouraged mass murder and the escape of war criminals. Corporate profiteering at the expense of innocents are often built into genocide, Simpson contends, and influence which killers are likely to escape justice and who is predisposed to help them. But perhaps even more shocking is the fact that those who organize and even those who commit mass murder are rarely punished for what they have done. Simpson demonstrates that most, in fact, profit from their crimes.