A Crime of Silence, The Armenian Genocide: Permanent Peoples' Tribunal 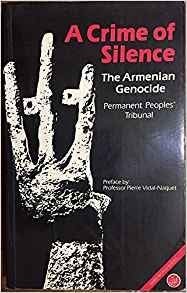 A Crime of Silence, The Armenian Genocide: Permanent Peoples' Tribunal

"Nothing is graver in a criminal sense than a deliberate state policy of systematic extermination of a people based on their particular ethnic identity."

— Verdict of the Tribunal

Description:
A reproduction of the evidence and papers presented in 1985 at a special four-day session of hearings conducted by the Permanent Peoples' Tribunal in Paris on the subject of the Armenian Genocide. The Tribunal's jury included three Nobel Prize winners -- Sean MacBride, Adolfo Perez Esquivel, and George Wald -- and ten other eminent jurists, theologians, academics, and political figures from various Western and Third World countries. The current-day Turkish government denies that any preceding Turkish government was responsible for the wholesale killing of Armenians. Of great interest in this book, therefore, is the official defense of Turkey's position, particularly when contrasted with the exhaustive survey of German eyewitness accounts of the killings. A detailed account is also given of the Turkish government's efforts in 1979 to pressure the United Nations to delete all reference to the Armenian massacres in Paragraph 30 of the U.N. Study on the Question of the Prevention and Punishment of the Crime of Genocide.