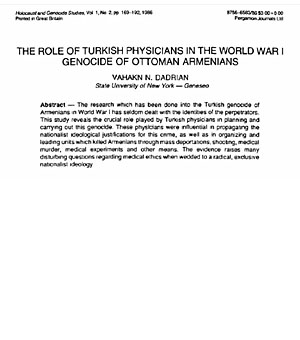 "Turkish doctors were not only involved in medical murder during the Armenian Genocide, but also in the very planning of the systematic murder."

Description:
A penetrating study that deals with a seldom-explored aspect of the Armenian Genocide -- the identities of the perpetrators. Dr. Dadrian reveals the crucial role played by Turkish physicians in planning and carrying out the Genocide. The physicians were influential in propagating the nationalist ideological justifications for the crime, as well as organizing and leading units that killed Armenians through mass deportations, shootings, medical experiments, and other means. The evidence raises many disturbing questions regarding medical ethics when wedded to a radical, exclusive nationalist ideology. The study relies primarily on European material, particularly British intelligence reports from the 1918-21 period of the Allied occupation of Constantinople, and German eyewitness accounts. Germany's wartime alliance and friendship with the Ottoman Empire lends a particular importance and credibility to these accounts. Other sources include American reports, mostly from physicians and nurses, and the trial records and documents of the Turkish Military Tribunal of December 1918 to May 1919.