Smyrna 1922: The Destruction of a City 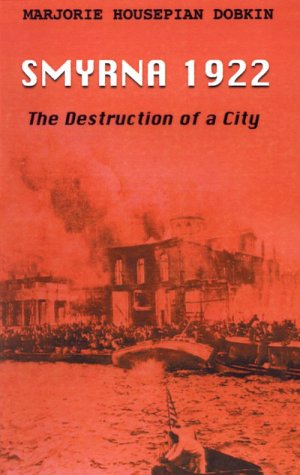 Smyrna 1922: The Destruction of a City

"The survivors of the Smyrna fire have the advantage of a more profound insight. Those interviewed did not fail to emphasize that in the midst of a holocaust provoked by hatred and abetted by greed, each owed his or her life to an act of compassion and courage."

Description:
Explores the Greek occupation of the Smyrna region after World War I, the Greco-Turkish War which ensued, and the entry of Mustafa Kemal's troops into Smyrna in September 1922, which ended in the spectacular fiery destruction of that legendary Mediterranean city. Smyrna, modern-day Izmir, was one of only two cities in the Ottoman Empire whose centuries-old Armenian community was spared from deportation and genocide in 1915. However, the fate of the Armenians in Smyrna was sealed when the Armenian quarter of the city was deliberately set on fire. Dobkin details the complex historical background of the debacle as well as its aftermath, which includes hitherto successful efforts to expunge the story from historical memory.