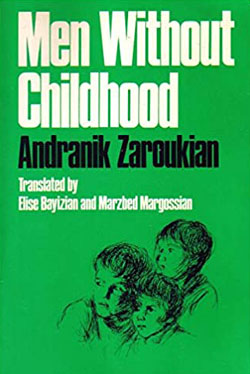 "We weren't just orphans. We never wore the orphan's mask of sorrow and desolation because we never felt the absence of goodness or affection. Ours was one collective face, rude, bitter, mischievous. We hated everyone, we hated each other. Every manner of lie was our defense. It was natural law to beat up the weak, to be beaten by the strong. For a piece of bread the size of a fist we battled, bit, bled. Love was an incomprehensible word, friendship an unknown feeling. Bread was comrade, friend, and love."

Description:
An autobiography detailing the experiences of Andranik Zaroukian, who as a two-year-old child in 1915 was deported with his mother from the town of Gurun in central Turkey. With hundreds of other women, children, and elderly they marched through the Syrian desert, finally reaching Aleppo, a northern Syrian city where they found refuge. Zaroukian spent his early years in orphanages in Aleppo and Jebeil, a town north of Beirut. One of the most prominent writers of the Armenian diaspora, Zaroukian's story is the story of thousands of children who were orphaned overnight, and haunted forever by a bitter past.