Crows of the Desert 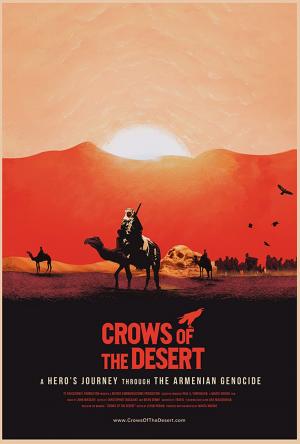 Crows of the Desert
A Hero's Journey through the Armenian Genocide

Description:
Crows of the Desert – A Hero’s Journey through the Armenian Genocide, is a documentary based on the Memoirs of Levon Yotnakhparian. It is the incredible true story of one man’s brave struggle to not only stay alive, but to help save his fellow Armenian survivors from near extinction in the 20th Century’s first genocide.

World War One was raging in the Middle East, as Britain’s Lawrence of Arabia fought side by side with the Arabs against the Ottoman Empire. Caught up in the chaos, Levon barely escaped with his own life, time and again. Risking extreme peril, he returned to this dangerous realm to lead a small expeditionary group to rescue the scattered, destitute survivors of the Armenian Genocide. Along the way, the rescuers risked their lives countless times, endured unimaginable hardships, and crossed paths with some of the 20th century’s most legendary figures, including Prince Faisal, Lawrence of Arabia, Sarah Aaronsohn and the El-Attraches. The story reveals how people from a variety of different cultures and faiths: Christians, Muslims, Druze and Jews, stepped forward to help the Armenian refugees.

Extraordinarily rare film and photographs as well as recently rediscovered documents have been gathered from archives around the world, to reveal the terror and heroism in this incredible story which took place a century ago in the Syrian desert.