Valley of Hope: The Armenian Journey from Terror to Triumph 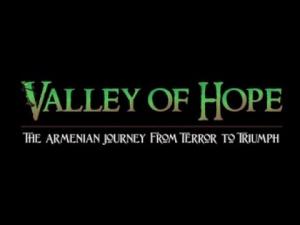 Valley of Hope: The Armenian Journey from Terror to Triumph

Description:
One and a half million Armenians were killed between 1915 and 1923 at the hands of the Ottoman Turks. This program looks at the history of Armenians, their immigration to the United States, with a special focus on Armenians who settled in the San Joaquin Valley, exploring their success in agriculture, businesses, politics, arts, and sports. as well as the discrimination they found. Stories of the victims of the genocide are told through interviews with survivors' children and grandchildren. More than 20 individuals are interviewed, including the family of legendary basketball coach Jerry Tarkanian, musician Richard Hagopian, television journalist Stefani Booroojian, retired California Supreme Court Justice Marvin Baxter, Fresno County Supervisor Debbie Poochigian, and Honorary Counsel of the Republic of Armenia Berj Apkarian. The program also discusses William Saroyan, Pulitzer Prize winning dramatist and author. The program explores the roles that faith, family, and education play in Armenian culture and what is being done to keep the heritage and culture alive in the youngest and future generations.