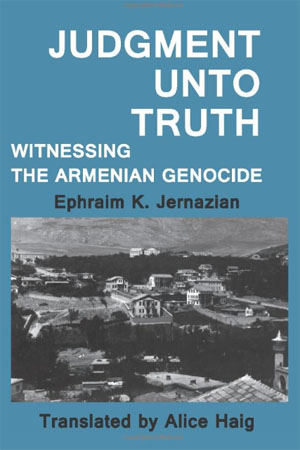 "By 1921 I was the sole survivor of the Jernazian family. How long would I remain alive? Would Urfa share the final destiny of Marash? By the end of 1920 the political climate was once again becoming ominous. Although no gun collections or other acts of general discrimination were performed, government officials created opportunities to harass individuals."

Description:
The memoirs of Armenian pastor Reverend Ephraim K. Jernazian captures the struggles of the entire Armenia nation before its removal from ancestral Armenia. In a style at once dramatic and dispassionate, personal and analytical, Jernazian weaves a narrative which chronicles the author's experience of a protracted genocidal process. First there are the Hamidian massacres of 1895 which Jernazian, then a five-year-old orphan, witnesses. Two of his brothers are killed. In 1909, Jernazian, by then an engineering student at St. Paul's College in Tarsus, experienced the Adana massacre with the killing of most of the Armenian Protestant clergy in Cilicia. Then the sweeping Young Turk genocide of 1915 is described by Jernazian. In the final anti-Armenian wave of the 1921-1923 Kemalist revolution Jernazian's only surviving brother and two sisters are killed, leaving him the sole survivor of the family. His own death after his arrest and imprisonment is averted by a miraculous escape.

Copies are available through the Zoryan Institute at http://www.zoryaninstitute.org