Black Dog of Fate: A Memoir: An American Son Uncovers his Armenian Past 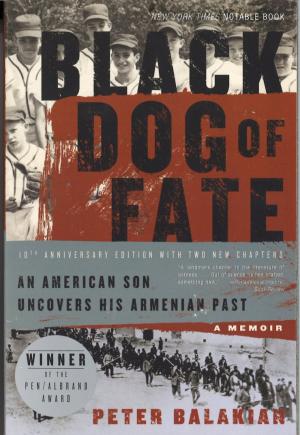 Black Dog of Fate: A Memoir: An American Son Uncovers his Armenian Past

"In all of this germ madness there seemed to be some deeper, more pervasive anxiety being expressed. Some pathological fear that I sensed in my grandmother when she hovered over me, incessantly brushing her hand over my hair and asking me, How are you, what can I do for you, are you OK? Eench, eench, eench. [What, what, what] For my grandparents' and parents' generation, perhaps the world was a place conspiring to kill you. After the Genocide, the fear of death was different from the fear of mortality. In this atmosphere of deep anxiety, our family was far from the optimistic mood of suburbia. As my grandmother said to me as I lay on my bed recovering from the measles, 'Sleep with one eye open; know the evil eye.'"

Description:
Peter Balakian's compelling memoir is about growing up American in a family that was haunted by a past too fraught with terror to be spoken of openly. Black Dog of Fate is set in the affluent New Jersey suburbs where Balakian, the firstborn son of his generation, grew up in a close, extended family, at the center of what was a quintessential American baby boom childhood. Yet despite this calm exterior at the center of his family's memories lay the dark specter of a trauma his forebears had experienced as the Ottoman Turkish government's extermination of more than a million Armenians in 1915, the century's first genocide. The unforgettable figure of the story is Balakian's grandmother, a survivor and widow of the Genocide who speaks in fragments of metaphor and myth as she cooks up Armenian delicacies. Balakian moves from childhood memory, to history, to his ancestors' lives, and lastly to the story of a poet's coming of age in the unfolding recovery of his sense of identity.