The Slaughterhouse Province: An American Diplomat's Report on the Armenian Genocide of 1915-1917 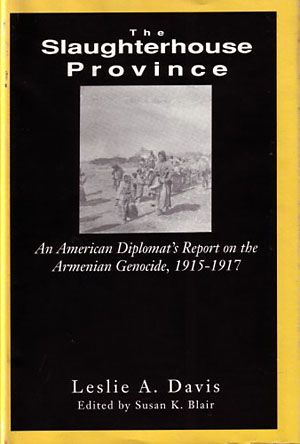 The Slaughterhouse Province: An American Diplomat's Report on the Armenian Genocide of 1915-1917

"We know how the largest party of all, the one that left Mamouret-ul-Aziz on Saturday, July 3rd, was taken to Malatia where, as they were entering the city, the men were separated from the women and all of them brutally massacred by the gendarmes; we know how the gendarmes informed some other men that the Vali had sent for them to return to Mamouter-ul-Aziz and when they had taken them a short distance killed everyone of them; we know how their wives and daughters were outraged by the gendarmes who accompanied them and by the Kurds and Arabs whom they met; we know how these women and children were driven over the desert in midsummer and robbed and pillaged of whatever they had...we have heard how thousands from all parts of the Empire were brought together at Deir-ez-Zor, where they remained in the most wretched poverty for nearly a year, after which all who had not perished in the meantime were massacred just outside the city."

Description:
An American diplomat's eyewitness account of the Armenian Genocide. When Leslie A. Davis, U.S. consul in Harput in eastern Asia Minor from 1915 to 1917, ventured out of the city, he found that the Ottoman policy of deportation of the Armenians went much further than forcible relocation: in his repeated forays into the countryside he saw the bodies of thousands of slaughtered Armenians. Davis realized the need for a full record of the atrocities. He brought along a doctor, who determined and described the causes of death, and a photographer, who took pictures of the victims. Davis summarized his findings in a report to the State Department written in 1918. Little attention was paid to it, and it was filed away in an obscure archive. Seventy years went by before Susan Blair, a scholar doing research on Turkey and the Near East in U.S. government archives, came upon Davis's report. The Slaughterhouse Province reprints this report; it also includes the photographs of the victims and a commentary by Blair putting the document in its historical context.