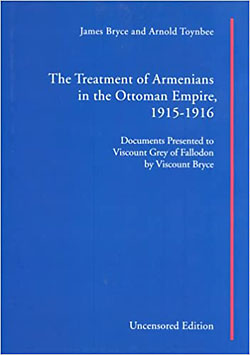 "These accounts describe what seemed to be an effort to exterminate a whole nation, without distinction of age or sex, whose misfortune it was to be the subjects of a Government devoid of scruples and of pity, and the policy they disclosed was one without precedent."

Description:
A compendium of eyewitness accounts, some of which were collected even as the Armenian Genocide was underway. The accounts are from a variety of sources: people passing through or living in Turkey who had the opportunity to observe the deportations and their consequences; natives of Turkey, mostly Armenians, who either escaped themselves or were able to get letters out of Turkey; and German citizens who were in Turkey during the massacres and subsequently published their accounts in their own countries. The book provides detailed information on the destruction of the Armenians in the Ottoman Empire and includes a place by place description of the extermination process that occurred in Van, Erzeroum, Aleppo, and other towns. Of special importance is a chapter by British historian Arnold Toynbee that summarizes Armenian history up to the year 1915.