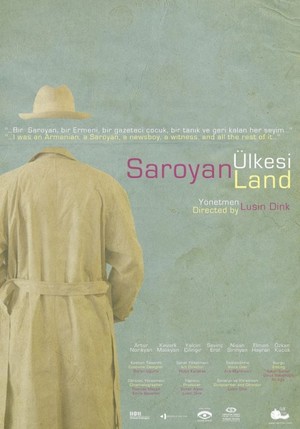 Description:
The author William Saroyan, the child of an exiled Armenian family, was born in the United States in 1908. He always portrayed himself as an American and a Bitlis-tsi, an Armenian from the city of Bitlis in Turkey. In 1964 he made a long voyage in Anatolia, leading him to his home town Bitlis. The docu-drama road movie "SaroyanLand" tells the story of this voyage, making use of his own memoirs and short stories, as well as the accounts of his travelling companions. In Saroyan's own words, told by a voice over, we see his anger, passion, longing for his homeland, ability of empathy and love of humankind. The script of the film, based on interviews, reenactment of Saroyan's stories, and the authors memoirs is a collage of his voyage in Turkey, told in his own words. While replicating Saroyan's voyage 49 years later, we witness the self discovery of a man, who by following the traces of his ancestors, also finds himself.

Available from:
SaroyanLand can be purchased as a DVD from Amazon: https://www.amazon.com/Saroyan-Land-%C3%9Clkesi-Region-PAL/dp/B07K4TX6TB