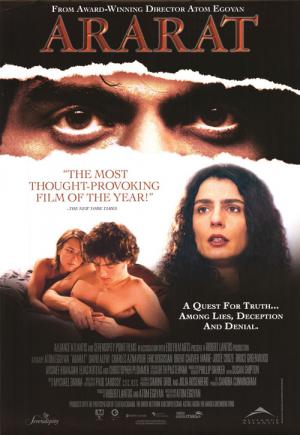 Ararat is a 2002 Canadian-French historical-drama film written and directed by Atom Egoyan and starring Charles Aznavour, Christopher Plummer, David Alpay, Arsinée Khanjian, Eric Bogosian, Bruce Greenwood and Elias Koteas. It is about a family and film crew in Toronto working on a film based loosely on the 1915 defense of Van during the Armenian genocide. In addition to exploring the human impact of that specific historical event, Ararat examines the nature of truth and its representation through art. The Genocide is disputed by the Government of Turkey, an issue that partially inspired and is explored in the film.

The film was featured out of competition at the 2002 Cannes Film Festival. It won five awards at the 23rd Genie Awards, including Best Motion Picture.

Available from:
Available through Amazon: https://www.amazon.com/Ararat-Atom-Egoyan/dp/B08SHRN4R9