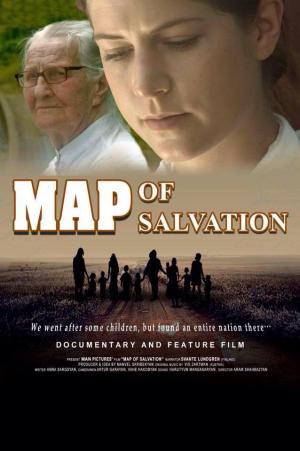 Map of Salvation is a feature-length docudrama film made to commemorate the 100th anniversary of the Armenian genocide.

The film tells about the humanist movement that emerged as a wave of protest and resistance during human tragedies in the end of the 19th and the beginning of the 20th centuries, especially the Armenian Genocide. The film is a documentary and is built on the basis of actual events only. The heroes of the film are humanists known to history, real people, who have witnessed the massacres of the Armenians They are five, European, humanist women: Maria Jakobsen (Denmark) and missionaries Karen Eppe (Denmark), Bodil Bjorn (Norway), Alma Johansson (Sweden), Hedwig Bul (Estonia). They are witnesses of the Armenian Genocide and the founders of shelters for Armenian children and women who barely escaped death. Their extremely dramatic encounter with a tormented people unknown to them was fatal for these great humanists. And they left their comfortable lives in Europe, came to the Armenian land from different countries, and devoted themselves selflessly and unconditionally to the people residing on that land. The film is told by Finnish historian Svante Lundgren. Passing through the path of mission of the films heroes, he draws a new map: The Map of Salvation. The film is dedicated to the memory of great humanists as a payment of gratitude on behalf of the entire Armenian nation, other nations espousing humanitarian views, and generally all people who cherish noble values.

Available from:
DVD copies of the film can be purchased from the Armenian Missionary Association of America: https://amaa.org/multimedia/