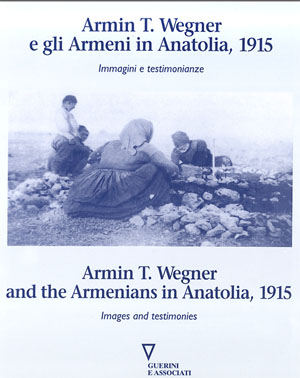 "It so happened that Field Marshal von der Goltz with a Turkish officer and a German officer was travelling rapidly by car across the desert to Baghdad, while the officer corps, his assistants and doctor in his retinue were travelling in the same direction but more slowly. In the evening when they stopped to set up camp, they would often pass near the death laagers [camps] where the Armenians, unprotected outcasts in the desert, slowly awaited their end. The Turks avoided these camps and denied their very existence. The Germans did not go to see them and acted as they did not exist at all. I was the only one who did, even though it was a health risk, for the refugees were suffering from many diseases. This was one of the reasons that the Germans were reluctant to go. But the main reason was that they were allies of the Turks, and the fear of contracting contagious diseases came second."

Description:
Armin Wegner (1886-1978) was born in Germany. At the outbreak of the First World War, he enrolled as a voluntary nurse in Poland during the winter of 1915-1915, and was decorated with the Iron Cross. In April 1915, following the military alliance of Germany and Turkey, he was sent to the Middle East as a member of the German Sanitary Corps. Between July and August, he used his leave to investigate the rumors about the Armenian massacres that had reached him from several sources. Eluding the strict orders of the Turkish and German authorities intended to prevent the spread of news and information about the atrocities, Wegner collected notes, documents, letters, and took photographs in the Armenian deportation camps. Samples of the evidence collected by Wegner is reproduced in this publication matching his photographs with his own eyewitness testimony. A man of conscience who protested his country's responsibilities in the Armenian Genocide, Wegner was also one of the earliest voices to protest Hitler's treatment of the Jews in Germany. In 1933 he wrote an open letter to the Reich Chancellor: 'The same stubborn will that allowed the Jews to survive and become an ancient people, will help overcome this danger, but as a result of this, shame and misfortune will befall Germany and for a long time will not be forgotten! In fact who is going to pay for the evil we are now inflicting on the Jews if not ourselves?'